The Chairman of the
Nigerian Railway Corporation, Alhaji Bamanga Tukur, has said that train services in the Eastern Railway District will commence before the end of the year.
Tukur made the announcement in Enugu on Monday while inspecting ongoing projects on the Port Harcourt-Enugu railway.
The board chairman expressed satisfaction with the work so far done, hoping that train services might commence before the end of the year.
”I believe with what I saw on ground, train services may commence before the end of this year so that Nigerians will begin to enjoy what we used to have before now.
“Our railway has come alive again; the Bridge No.15 which nature brought down has been rehabilitated.
“It is a thing of joy that the transformation agenda of the president through the SURE-P,  all the railway projects abandoned for years have been brought back to life with the help of the programme,” he said.
On the welfare of railway workers, the chairman said he would engage the National Salaries and Wages Commission to see how to improve their remuneration.
In his remarks, the Managing Director of the Nigerian Railway Corporation, Mr Adesiyi Sijuwade, said that all hands were on deck to ensure that train services from Port Harcourt to Makurdi commenced by December.
“Train services from Port Harcourt, particularly Port Harcourt mass transit, starting from Diobu, Elewon, Trans-Amadi to Imo River would be running on daily basis when completed.
“Ultimately, train will then start moving to Umuahia, Aba and Enugu. Our intention is also to have the services to Gombe and when the insurgency stops, it would be extended to Maiduguri,” he said.
In his address of welcome, the Railway District Manager, Mr Donatus Ogbodo, said the Eastern District lines covered a distance of 310 kilometers linking four states of Enugu, Ebonyi, Abia and Rivers.
He said the rehabilitation of the line commenced in January 2012 following the award of contract for the collapsed Bridge No. 15 at Nyaba, Awkunanaw in Enugu South Local Government Area by the Federal Government.
Ogbodo said the rehabilitation had progressed steadily, adding that normal passenger train services would soon resume in the district.
According to him, the district has successfully completed the rehabilitation of eight coaches which are the first batch of coaches to be rehabilitated for operation in the district.
The Chairman of the Nigerian Union of Railway Workers in the district, Mr Orji Kalu, urged the chairman to look into the welfare of workers, including the upgrade of their salaries and pension deductions.
He stressed the need for training and retraining of the workers, pointing out that virtually all the departments were left with one or no staff due to retirement of old workers. 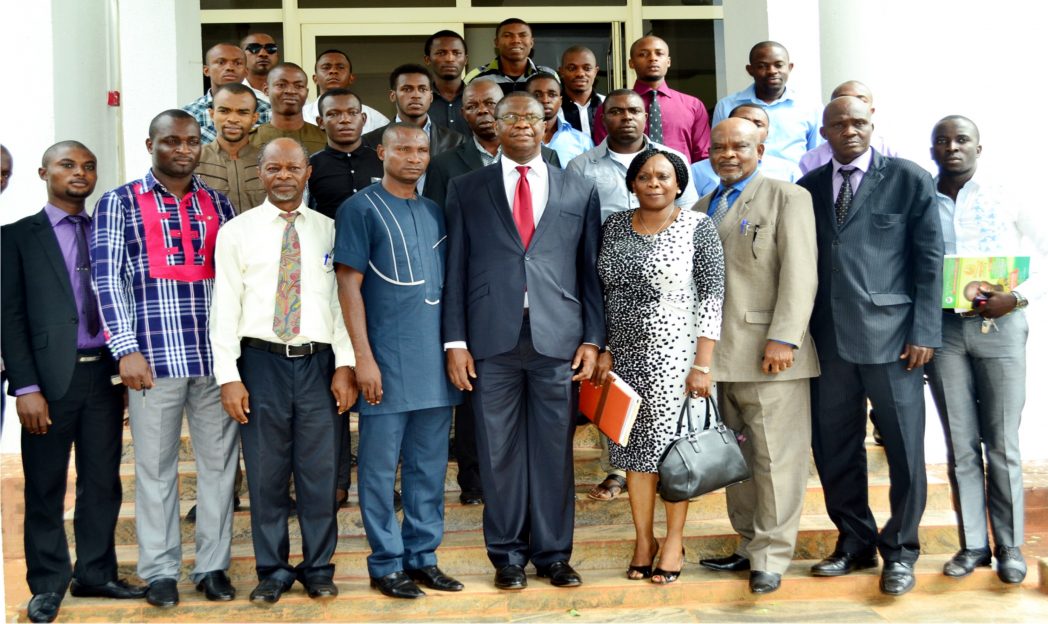 Vice-Chancellor, University of Nigeria Nsukka, Prof. Benjamin Ozumba (middle), with executives of Zone B of the National Association of Nigerian Students (NANS), when they paid him a courtesy visit in Nsukka, recently.