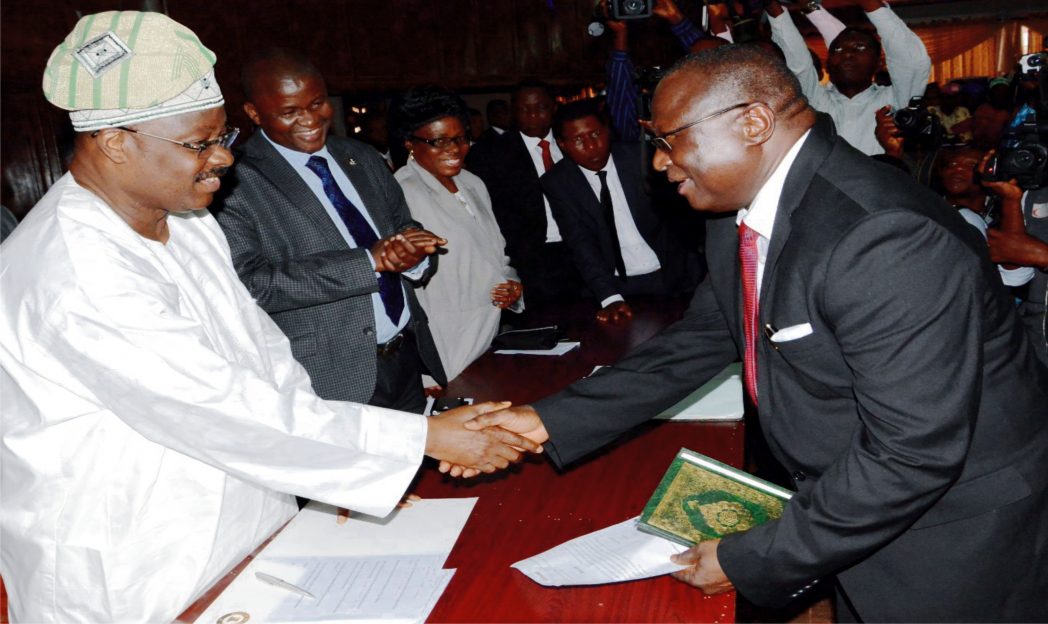 The Bauchi State chapter of the Buhari Cam
paign Organisation has pledged to buy nomination form for Gen. Muhammadu Buhari to contest the 2015 presidential election on the platform of All Progressives Congress (APC).
The Coordinator of the Nigerian Solution Network Group, Dr Danjuma Dabo,  made the disclosure in Bauchi during a solidarity rally in support of Buhari.
Dabo said whether Buhari was willing to contest in the 2015 polls or not, the organisation would source for fund to foot both the campaign bills and purchase the nomination form for him.
The coordinator of the group, who said that the N27 million fee for the purchase of nomination form was too high, added that it was above Buhari’s financial capability.

The wife of the Primate of All Nigeria (Anglican
Communion),  Mrs Nkasiobi Okoh,  has said that women of the church will participate fully in the 2015 general elections.
Okoh, who is also the President of the Mothers’ Union/Women’s Guild, the women’s organisations of the church said this  in Abuja in an interview at the end of a two-day conference of the Abuja Diocese during which the maiden edition of the women’s magazine was launched.
She said that the women had been duly sensitised on the importance of participating in the elections and that they were poised to take active part in the exercise.
She said that the women had also been admonished to also ensure that all members of their families who were of age, exercised their franchise.

Governor Ibrahim Dankwambo of Gombe State
has expressed satisfaction with his performance in the last three and a half years of administering the state.
Dankwambo stated this in an interview with newsmen shortly after his return from Hajj.
He said that his administration had delivered a lot of democracy dividends in the state as it was testified by people in the state.
According to him, at the time of his electioneering campaign in 2011, he did not promise anything to the people of the state.
He said, however, having reviewed his performances so far; he was satisfied with his achievements.

The Kebbi State Government has approved the
release of N144 million for the revival of the state-owned Neem Tree processing and transformer manufacturing companies. Governor Saidu Dakingari stated this when he received a delegation of the state’s elders’ consultative forum, led by Justice Usman Mohammed, in Birnin Kebbi State. Earlier, Mohammed said the body called for the revival of the ailing industries to provide employment, attract investors, generate revenue, and promote industrial development of the state.
He said findings by the forum showed that N90 million was required to revive the transformer manufacturing company while Neem Tree processing industry needed N54 million.

An economist, Mr Adekunle Oyinloye, has urged gov
ernment to give more attention to the welfare of teachers to improve learning. Oyinloye told newsmen in Omu-Aran, Kwara State, that adequate incentives would spur the teachers to give their best to improve students’ performance. Oyinloye, also the Managing Director, The Infrastructure Bank, Abuja, said such incentive became necessary so as to give the teachers a sense of belonging to do more. The banker described the teaching profession in the yesteryears as one of the respected within the public service, especially at the grassroots, saying that the contrary was the case nowadays. The issue of improving the capacity of Nigerian teachers to me has become a kind of misnomer priority to both the government and communities.

Senator Zainab Kure (PDP-Niger South) and other as
pirants have picked expression of forms to contest various positions in the 2015 general election.
Mr Tanko Beji, the state PDP Deputy Chairman, disclosed this yesterday in an interview with newsmen in Minna.
Beji said that those interested to run for the polls under the party have purchased their forms, adding “many aspirants are still coming forward.”
“It is a general law that those aspiring for a position either at federal or state level must purchase a form and must meet the requirement for such position ahead the slated date for the election.
“Let this also be a notice to those with ambition to run for any seat either at federal or state level to come and purchase their forms because time is not on their side.
“As you can see, quite a number of people are here to collect their forms, and more are still coming,” he said.
Ogun

The Ogun State Christian Pilgrims Welfare Board has
commenced screening of candidates for the  2014 Holy Pilgrimage to Israel, Greece and Rome.
The screening took place at the board’s secretariat in Oke-Mosan in Abeokuta.
The Chairman of the board, Bishop Julius Ogunseye, said at the venue of the screeming that the exercise was to ensure a hitch- free  pilgrimage.
He explained that the board needed to ascertain the health status of the intending pilgrims so as to prevent any medical  challenge.

GovernorAliyu Wamakko of Sokoto State, has said
that more than 1,500 students were sponsored by his administration to undergo various training in universities abroad.
Wamakko made the disclosure in Sokoto at the end of the annual national leadership training course of the Muslim Students’ Society of Nigeria (MSSN).
He said his administration had trained more than 20,000 unemployed youths in various vocational skills between 2007 and 2014.
The governor, who was represented by Alhaji Harande Mahe, the Special Adviser to Wamakko on Security Matters, said the students would be part of the human capital for repositioning of the state.
He added that “the more than 20,000 youths were trained in various forms of vocational skills to make them productive to themselves and to the society.

Taraba State Acting Governor Garba Umar said that
he never declared ailing Governor Danbaba Suntai missing.
Umar offered the clarification in a statement signed by his Chief Press Secretary, Mr Kefas Sule, and issued to newsmen in Jalingo.
The statement explained that Umar simply told journalists that he was yet to set his eyes on Suntai since he returned from the medical trip abroad.
“The attention of the acting governor has been drawn to the screaming news headlines purporting that he has declared Suntai missing.
“Umar hereby places on record that at no time did he declare his boss missing, he simply said he was yet to see him since he returned from medical trip to London,” the statement read in part.