Recently, a national
emergency which threw everyone everywhere in the country and the world at large into a pandemonium arose in Nigeria, when a foreigher, Dr Patrick Sawyer, who was sick from the Ebola Virus infection entered into the country and infected some of the people who came in contact with him with the Ebola virus.
The Federal Government of Nigeria labeled it National Emergency while World Health Organisation (WHO), declared it an International Public Health RISK.
Against this back drop measures were taken to combat the viral disease and a cross section of Nigerians resident in Port Harcourt Speak on how well the government handled the matter.
The Co-ordinator, Centre,’ for the Treatment of Cancer University of Port Harcourt Teaching Hospital (UPTH), and lecturer, Prof. Rollings Jamabo, in reacting to the situation, said, “the government in Nigeria has done tremendously were in containing the disease, I give them kudos”.
Also responding, National President, Resident Doctors Association of Nigeria, Dr. Prince Dan-Jumbo, stated that the fight against Ebola was one fight Nigerians fought in unism. According to him, “that is one area Nigerians have worked in unism, the Ebola fight was an  all for all fight.
The Nigerian government, that is, the federal and Rivers State Governments have   performed  credibly and for that, I give them a plus.”
Another respondent, a government functionary who prefers not to be mentioned, in his response,  said the kind of responsibility government displayed against Ebola was nothing short of love for its people.
He expressed regrets that some people had unequivocally stated that the Ebola thing was political,  that it was a ploy by government to score cheap political point.
“That is rather unfortunate,” he said, adding, “ a whole lot of partner organizations, including World Health Organisation, Centre for Disease Control, Doctors without Borders, United Nations Economic Organisation among others were involved in the fight against Ebola in Nigeria, it could not have been a ploy to score cheap political point If these groups who sent across to Nigeria nothing less than three personnel each were involved.”
In his response, Mr Temple Emmanuel, a resident of one of the thickly populated areas in Port Harcourt, UPE Sand-Field, Borikiri, Stated “this is one time I am very happy with government,  if the fight against Ebola was not  intense and it was allowed to spread, families will be dying  in their numbers given the living conditions we have in this town especially this sand field and other water front areas.
“We thank God for our government, they fought hard and Ebola has gone, since 1976, about 3,000 persons have died in Liberia, here it would have been one million within the first three months, thank God for our government,’ says Ida’ala Brown, and automechanic based at Ikoku spear parts market, mile 3, Port Harcourt.
The Rivers State government, through the state commissioner for Health, Dr Tamunoiyoriari Parker, declares that presently, the state recorded only one fatality while there are no fresh infections. 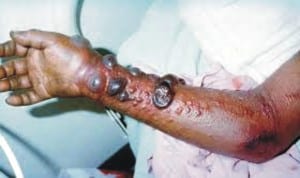