In line with the empha
sis placed by education authorities on more practical education, students of the Rivers State Polytechnic, Bori have developed and produced the institutions own brand of paints, awaiting the approval of the Standard Organisation of Nigeria (SON) before they is commercialised.
The Rector of the school, Sir Obianko Nwolu-Elechi made   this revelation recently at the 18th-20th convocation lecture of the school in Bori.
In his opening speech, he t emphasised that the school authority’s focus on technical education, as is usually peculiar to polytechnic, noting that the result was the production of the paint.
While noting that emphasis on technical education in Nigeria in the last two years has become over-whelming, he stated that “in all the five or four common wealth Association Conferences, this had been the focal point, and ours cannot be an exception.
“Today we are re-examining the role that Polytechnics are supposed to play in the technical development of Nigeria.
“In this Bori Polytechnic, there is a Paradym Shift from mere academic resources, to practical issues, because we are aware that Polytechnic System of education is more of practical orientation than academic exercise,” he said.
The Rector also revealed that in addition to the Paint, Staff and students of the School have also produced other items that have been sent for scrutiny and subsequent approval by relevant authorities in Abuja.
He stated that when the SON  Confirms the Paint as having met the required standard, everything will be made possible “for us to commercialise the production of the paint.
“That is the little we think we can contribute to society, and we have encouraged our staff and students that all hands must be on deck to ensure effective realisation of our dreams.
Last week Wednesday. 27 law makers loyal to Governor Chibuike Amaechi issued a statement to condemn the expulsion of some commissioners from the PDP. According to them, the reasons, methodology and procedures that led to these pronouncements are unconstitutional by reasons of Article 21 (4) (5) (6) of the constitution of the People Democratic Party.
On Thursday last week National Assembly members together with, local government chairman of the PDP, the Rivers State Executive Council and local government Chairman in the 23 councils formally announced their boycott of the PDP Mini-convention billed to held last Saturday at Abuja.
Speaking unbehalfof each of the group were, Honourable Asita for National Assembly members, Dr Tammy Danagogo of Rivers Executive Council, Chimbiko Akawlo Spoke for the council chairman, while Samuel Horsfall for Party Chairmen.
Asita gave reasons for the boycott and said, “we are worried about the rascality which activities of the party is carried out in Rivers State, we are aware that the Mini-convention is on Saturday and we had hoped that the party at the centre take steps to put things right. Having watched over time our party gliding into disrepute.” 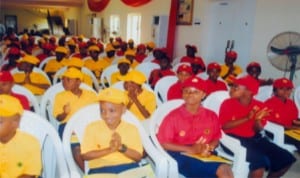