A chieftain of the Peoples’ Democratic Party (PDP) in Rivers State and former Chief Security Adviser to ex-Governor Peter Odili, Chief Anabs Sara-Igbe, has said the Minister of State for Education, Nyesom Wike arm-twisted President Goodluck Jonathan to engage in a feud with Rivers State Governor, Chibuikke Rotimi Amaechi to enhance his 2015 governorship ambition.
Sara-Igbe in an interview in Abuja, insisted that Wike pitted the President against Amaechi just to realise his political ambition, saying it had worked against the rapid growth of the state.
He said, “The issue of the crisis between Amaechi and the President is a self-made scheme of a particular aspirant who feels that such is the best way to achieve his ambition. And that aspirant has been able to bring fire at the backyard of the President to say ‘well, if you don’t support me, this fire will burn you. But if you bring me, I have the capacity to off this fire.’ And so, Mr President is being arm-twisted.”
He, therefore, appealed to both parties to bury their differences in the interest of PDP and the state.
He, however, warned that any attempt by the PDP to dance to the minister’s antics by fielding him as its governorship candidate in the forthcoming election would lead to the party’s doom.
The security expert said the elders of the region were ready to make peace between the governor and Jonathan for the interest of not just Rivers and Bayelsa states but the South-South region as a whole.
He warned that the PDP shouldn’t make the mistake of fielding Wike as its governorship candidate because he is not saleable.
He warned that Wike’s candidature would equally generate what he called “bad blood’’ in the state because he is an Ikwere man.
He said, “If the PDP brings a candidate other than Wike, we can achieve that peace but if Wike is the candidate for 2015 governorship in the state, we cannot achieve that peace. Wike’s candidature will also generate bad blood for the party.
“As a person, I will not say Wike is a bad man or he is a good man but what I am saying is that Wike, as an Ikwerre man, has spoilt the whole thing because an Ikwerre man has ruled. Celestine Omehia ruled for six months and handed over to Amaechi and Amaechi has ruled for over seven years now.
“Ikwerre has taken it, Rivers State is made of more than 20 ethnic groups. So, why must one ethnic group dominate it over the entire state? It is not fair. His (Wike’s) candidature will cause tension in the state and there will be resistance from the people of Rivers State and don’t forget that Amaechi is a sworn enemy of Wike, it will also generate bad blood and tension.”
But in his reaction, Wike’s Special Assistant, Media and Communications, Mr. Simeon Nwakaudu, told our correspondent that most of the people making such comments were intimidated by Wike’s political profile.
He said, “If at all there was any problem between the President and Amaechi, it started long between 2007 and 2008, and has nothing to do with the minister of state for education. How can they say that Wike’s emergence will spell doom for the PDP in 2015?
“The simple fact is that the party is going to do primaries and that is why they are afraid. It is for members of the party to decide. The leader of the party in Rivers State today is Wike even when the governor tried to weaken the party before he defected. The man you are talking about, I don’t think he is a strong member of the party, and I cannot recognise his name,” he said.
It would be recalled that Nyesom Wike has repeatedly denied any role in fuelling the feud between the president and the Rivers State governor. 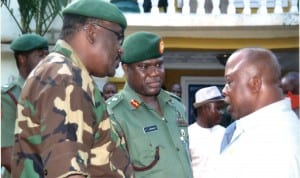