Commandant of the Adamawa State Internally Displaced
Persons Camp, Mr Abdulmumini Jauro, yesterday said about 1,300 people have been registered at the camp.
Jauro said this in an interview with newsmen at the Bajabure refugee camp in Girei Local Government Area.
The commandant, who is a member of Nigerian Red Cross society, said nine pregnant women were among the displaced persons.
“We have so far registered over 1,300  people who escaped from attacks in Madagali, Michika and Mubi North and South Local Government Areas of the state,” Jauro said.
He said among the refugees are 162 students of the federal polytechnic and Adamawa State University, Mubi, who are indigenes of Taraba State.

A traditional ruler in Benue State, Chief Hillary Ikyima,
has taken over the land which Mbakyaa and Dzev communities of Shangev-ya, have been fighting over.
He also called on the state government to urgently send in surveyors to cordon the disputed area in order to avoid further clashes.
Ikyima made the call yesterday when he led clan heads and other stakeholders of the area to initiate a peace meeting between the people at Imande village.
The traditional ruler, thereafter, directed all parties involved in the crisis which was said to be as a result of the gains of the forest reserve on the land, to immediately vacate the area or be handed over to law enforcement agents.
Secretary of Kwande Local Government Council, Rev. Akpaegh expressed satisfaction with the action of the traditional ruler, while pledging the commitment of the council to work closely with the traditional institution to ensure lasting peace.
FCT

Governor Olusegun Mimiko of Ondo State has dispelled
rumours about his defecting from the Labour Party to the Peoples Democratic Party (PDP).
The governor made this known at the end of the party’s National Executive Committee (NEC) meeting in Abuja yesterday where the national chairman of LP, Chief Dan Nwanyanwu also stated that Mimiko’s attendance at the NEC meeting puts paid to reports that he has dumped the LP. He further said he would step down as the party’s chairman and not seek re-election, having served as chairman since 2004.
At the end of the NEC meeting, Governor Mimiko in a terse response to reporters’ question about his defection said: “It is all rumours and I do not react to rumours.”

The Emir of Gombe, Alhaji Abubakar Shehu Abubakar,
has called on people of the state to pray against a re-occurrence of the recent flood disaster.
It was gathered that the flood which followed a heavy rainfall, claimed six lives and destroyed over 100 houses in Gombe metropolis.
He also cautioned them to desist from any action that could block waterways.
The emir spoke yesterday when he went round the town to commiserate with the bereaved families and inspect the damage caused by the flood.
Speaking through the Yeriman Gombe, he advised the people to always keep their environments clean.

Jigawa State Command of the Nigerian Security and Civil
Defence Corps(NSCDC) yesterday said it has recovered 196 out of the 202 permanent voters cards stolen in Malam-Madori Local Government Area.
This was disclosed to newsmen by the state Commandant of the NSCDC, Dr.Muhammad Gidado.
He said after the command issued a statement on the missing cards in Tanukutaru ward, Gandun Sarki polling unit of Malam-Madori Local Government Area, three suspects were arrested.
He added that after investigation, 196 cards were recovered by the detectives. He maintained that the remaining six will soon be recovered.
Kaduna

Kaduna State Governor Mukhtar Ramalan Yero has
called for the suppression of religious extremism of all kinds, saying most reasons given for it ends at achieving personal or group interests, thereby creating division, encouraging violence and retarding development.
Receiving the management team of Darul Iftar, an Egyptian institute led by the country’s Ambassador to Nigeria, Ashraf Salama, in Kaduna, Yero advised Nigerians to understand the true teachings of their religions to enable them promote unity and peaceful co-existence.

The Kano State chapter of the committee of leaders of
the legacy parties, ACN, ANPP, CPC, which merged to form the All Progressives Congress (APC), has denied a resolution to support the aspiration of Governor Rabi’u Musa Kwankwaso for the presidency next year.
A report had last week claimed that the state’s elders committee of the APC was backing the governor to contest for the presidency.
But the leaders of the defunct parties in a statement said they were not aware of any elders’ committee of the APC in the state.
The terse statement signed by Alhaji Musa Umar (ACN), Garba Bala of the defunct CPC and Mallam Muktar Kwaru from the defunct ANPP, said the endorsement was “far from the truth”.
It said the two signatories of the purported communiqué were not members of the legacy parties, but members of the Kwankwasiyya group and therefore could not speak for the legacy parties.

Five local government councils in Katsina State have
been dragged before the North-west zonal office of the Tax Appeal Tribunal sitting in Kaduna by the Federal Inland Revenue Service over tax evasion.
The councils were accused of not paying  Withholding and Value Added Tax for three years.  Counsels representing the FIRS, Barrister Nasambo Mohammed and Barrister Raji Mukhtar, told the tribunal that the five local government councils namely: Mani, Batsari, Dutsi, Daura and Baure, collected tax and refused to remit same to the appropriate authority.
Counsel representing the five local government areas, Barr. A. A. Ibrahim, asked the tribunal for more time to allow the parties negotiate out-of-court settlement.
Chairman of the tribunal, Bashir Abdullahi Albasu, then adjourned the matter to October 15, 2014.
In the same vein, Kaduna Polytechnic and Ahmadu Bello University Zaria have opted for out-of-court settlement in their tax evasion cases brought against them by the Kaduna State government.
Kogi

Chief Medical Director of Federal Medical Centre, FMC,
Lokoja, Kogi State, Dr. Gbadebo Eleshin, yesterday, said the centre would appeal the suspension of four  of its doctors by the Medical and Dental Council of Nigeria.
Last week, the Medical and Dental Council suspended Dr. Temitope Gabriel Onile for three months, while     Drs Nzurumike Charles Nanna, Danmusa Adamu Ochala and Omotayo Oluwa Damilola were each suspended for six months.
At a briefing, Eleshin said the suspension was carried out “in error by the Medical and Dental Practitioners Disciplinary Tribunal. The suspension was issued to the four doctors as a result of a pregnant woman whose time of delivery went beyond the Expected Day of Delivery, EDD, which was admitted for observation. When her condition eventually defied normal delivery and induction, and it was discovered that the woman’s uterus had ruptured, the doctors quickly prepared her for caesarean session, to save the mother and the baby, but both gave up the ghost on the way to the theatre as a result of complications.”

The Lagos State government says it has not decided on
the recent directive by the federal government that schools across the country should resume on September 22.
The state Commissioner for Health, Dr  Jide Idris,  said this while addressing newsmen on the Ebola virus.
He said  the issue was before  the  State Executive Council and that government would soon make a pronouncement on whether schools in the state would resume on the date or not.
The federal government recently reversed resumption date of schools nationwide to September 22 from the earlier date of October 13.
The Minister of Education, Mallam Ibrahim Shekarau, while announcing the reversal in Abuja, said the government shifted the date backwards, because the virus had been significantly contained.
Sokoto

Governor Aliyu Wamakko of Sokoto State says the way
the federal government is treating the issue of insurgency is not comforting.
The governor who spoke while commissioning vehicles donated to the state police command by the MTN foundation, said: “Nigerians are tired of excuses; we want to hear good news. We want to hear something positive. If Nigeria can win a civil war and win the war against militants in the Niger Delta, I wonder why it cannot overcome insurgency”.
He accused the government of being soft in its approach to the matter.
“The federal government needs to change its attitude towards insurgency; it needs to give our security agents all that they need to fight the war and win. I believe we have the capacity to win this war and defeat the agents of darkness,” he said.
He lamented that the way the matter was being handled at the moment was causing fear among the populace.
Wamakko also appealed to members of the public to support security agencies with prayers and useful information. 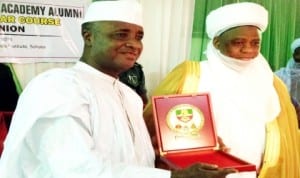