The recent ‘no zoning’
comment by Felix Obuah- led executive of the Rivers State Chapter of the Peoples Democratic Party (PDP) appears to be deepening the crisis in the party some stakeholders of the party have demanded the resignation of the PDP leadership or face the wrought of the members before 2015 election.
Speaking with The Tide, a PDP stalwart from Ward 19 in Etche Local government area of the State, Mr. Hillary Amiefele called for the immediate dissolution of the Obuah executive as it did not reflect the wishes of party members in the state.
According to him, Obuah executive of the party in the state would not guarantee justice and equity ahead of the party primary election in the state, going by his ‘no zoning’ comment.
He alleged that the leadership of the executive was under the influence of the Minister of State for Education, Chief Nyesom Wike, who was alleged to have single handedly constituted the party executive in the state.
Amiefele condemned comments credited to Obuah led that there would be no zoning in the allocation of political officers in the State, including governorship, insisting that the decision of the founding fathers of the party on zoning of governorship to area that had not produced the position in the state superseded the decision of the Obuah led executive.
Another PDP Stakeholder from Ward 2, Opobo/Nkoro Local Government Area, Mr. Moses Toby said the party’s position on zoning at the national level cannot be set aside by the party executive in the state or any official of the party, except through amendment of the party’s constitution.
Also speaking, a PDP Chieftain in Degema Local Government Areas, and leader of Kegema Unity Forum (KUF) Comrade Sobomabo Jachrich said, Felix Obuah and his executive would fail in their plot to favour Chief Wike for governorship in the 2015 election.
According to him, Wike and Obuah led executive are not recognized by the party and therefore do not have the constitutional right to upturn the constitution of the party, by announcing that, there would be no zoning of political offices in the party.
Comrade jachrich said, any attempt by the Obuah led executive to disregard the PDP constitution on zoning would lead to the failure of the party in the state in the 2015 elections.
It would be recalled that, the state executive of the PDP recently announced that, there would be no zoning of any political offices ahead of 2015 election.
The party executive also condemned the invitation of the party aspirants by members of the Board of Trustee (BOT) from the State for screening.
Briefing journalists at the State PDP Secretariat on Tuesday, Obuah said the BOT members in the State have no constitutional rights to invite aspirants for screening ahead of the 2015 elections in the state. 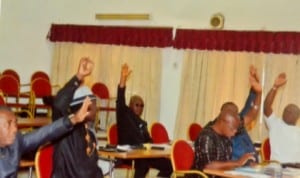