Last Sunday, August 24th
2014 was not only historic, but memorable for lovers of good music and choreography as Mona Dance School, Port Harcourt held the 7th edition of her annual star night  amidst glitz and glamour at the prestigious auditorium of the Arena, No 30 Tombia Street,  Port Harcourt.
The large audience who attended the event from all works of  life were thrilled by the raw talent and mesmerising dance steps of the trained dancers and their exciting and educative drama displays that left the audience spell bound as well as captivating music that blended with the dancers and created  the right mood for the night.
The star studded event started at about 5.15pm with an opening prayer by Everest Okonkwo, followed by the introduction of the instructors, the creative minds behind the artistic creation, Jazz Line dance titled “When Jesus says yes…. “by Destiny’s child performed by Holiday socials students and “my first Ballet and Adagio” expressing the different basic movements in Ballet in tune to music using the body, space, different levels, direction and formation.
Other events of the night included in between” which talked of joining hands together in aiding positive growth of our children, “First Game,” which is a Hip Hop rap beat, “Suffering and smiling” which teaches that irrespective of whatever situation we many find ourselves, the smiles on our faces give us the strength to hope for a better day, and “thanksgiving” which teaches that even when we derail from his path in the bid to scarch  for quicker solution and fail to find them, God’s grace is always available.  There was also ‘Agbeko’, the migration dance of Ghana featuring music and life drums performed by Mona Dance School Instructors and DWM. “Watch me Dance” which is the joy of learning to dance by all ages performed by parents of Holiday socials students, ‘Apeja’ (Fisher Men Dance) exhibiting the  rich occupational culture of the people of Lagos state and “the experiences”, Music is broken heels by Alexandra Burks.
The high point of the night is “influence” the theme of the star night which show cased heroes, leaders and remarkable people who have fought against human/ social injustice, poverty, oppression and supported Christian movements with a sence of purpose and integrity, men and women who still speak long after they are gone some of them include the following, Mahatma Ghandi (1869-1948), Martin Luther  King Jnr (1929-1968), Mother Theresa (1910-1992) Bishop Ajayi Crowder (1809-1890) and Nelson Mandela (1918-2013) (46664). Speaking with The Tide Entertainment shortly after the events, the Airtistic Director, Mona Dance school Port Harcourt, Mrs Eloi Etomi said, “I feel fulfileld because we are starting with people who want to fulfil their world, we should have different mindsets not to be waiting for our leaders to infulence the soceity we live in.” She noted that we could start it our selves  in our little ways wherever we find ourselves so taht the society will be better for all of us to live in. She disclosed that Mona Dance School started in April 2008 and that the star night is an annual event with different themes. According to her this year’s theme has been most fulfilling becasue of its message. She however assured that next year will be better.
One of the guests at the event, Pastor Melvis Odobo noted that the nights event was wonderful and the theme very apt and essential in the sence that the mesasge they passed across to the audience was what the country needed right now considering the personalities  who passed through the society and used their and life to influence the society positively.
He stressed that the Mona Dance school is relevant to the society because dance is an art and we should channel the energy of our young ones in that direction as it will help to develop them in body and soul.
A choreographer with the school, Mr Akuro Godwill Bubbo and American based instructor and dancer Miss Angel Eieyae gave kudos to the students for their wonderful performance. 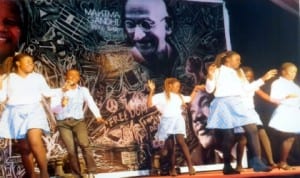