Workers of the Aviation Ministry and its agencies are now living in fears over the on-going staff verification and evaluation exercise ordered by the new Minister of Aviation, Mr Osita Chidoka.
Sources who spoke to The Tide Aviation correspondent yesterday on the development, said the current verification of the entire workforce in the sector may lead to the sacking or redeployment of some redundant members of staff.
The Tide learnt that the Minister was not with the large number of workers he met in the sector without proper definition of their roles.
Mr Chidoka, who assumed office a month ago had gone round all the agencies and parastatals under his ministry to have first hand knowledge about their operations and to know the state of their facilities.
After the inspection, the Minister was said to have asked top officials of each agency to embark on staff audit which sources said might ultimately lead to the sacking of some members of staff.
An official of the Federal Airports Authority of Nigeria (FAAN) who spoke on the condition of anonymity, said we are aware that some thing is going on because of the mood of the people around, but nobody seems sure of who it will affect or when it will happen.
“I learnt it is going to be massive and because we have not witnessed such for a long time, I believe it wont be easy, people may be deployed, reported or sacked,” he said.
It was equally gathered that preliminary reports had shown that some workers were redundant while some due for retirement were still hanging on and some new employees were placed above their grade.
When The Tide correspondent visited the administrative block of some of the agencies, the workers were seen in groups, discussing the development and preparing to meet the panel in turns.
A top source at the Aviation Ministry, who pleaded not to be named because he had not been authorised to speak on the matter, said it is only a matter of time for some people to either be reposted or asked to go. Some people are still occupying positions where personnel are not needed due to the remodeling exercise and other developments.
“Some other members of Staff are just buying time after attaining the retirement age, the ongoing exercise will aim at reducing the workforce for more efficiency,” he said.
However, when contacted the spokes person for FAAN, Mr Yakubu Dati, denied know ledge of such a development in the sector, saying “I am sorry, I’m not aware”.
The General Manager, Corporation Communications, Nigerian Civil Aviation Authority, Mr Fan Ndubuoke, could not be reached for comments as at the time of filing the report as his mobile telephone could not connect. 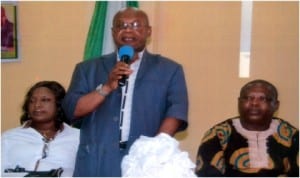 Commissioner for Chieftaincy and Community Affairs, Rivers State, Hon. Charles Okaye (middle), making a speech during a training workshop organised by his Ministry in conjunction with SEEFOR in Port Harcourt, yesterday. Photo: Egberi A. Sampson