Crisis is presently rocking the Niger Delta Basin Development Authority (NDBDA) in Port Harcourt over who becomes the new managing director.
Investigations have revealed that two top officials, Chief M. C. Azikiwe, Executive Director Services, and one Dr. M. Eneife who is the Executive Director, Planning, Investigation and design are locked in a battle for supremacy over who succeeds the present Managing Director, Mr. Mathew Aleru, who according to records, is over-due for retirement.
Inside sources say both Eneife and Azikiwe were appointed Executive directors same day in the authority but Dr. Eneife went on secondment when Chief Diepreye Alamieyeseigha, the former governor of Bayelsa State, appointed him as a Commissioner in his administration and even re-appointed as Commissioner when the present President, Goodluck Jonathan was governor in Bayelsa, his home state.
When the present managing director, Matthew Aleru became MD of NDBDA, the position of Executive Director, Planning, Investigation and Design became vacant and Dr. Eneife whose job as commissioner in Bayelsa ended, was said to had started fighting to occupy the vacant position of Executive Director PID department.
Luckily to Dr. Eneife, who also is an engineer by profession, he won the battle and became re-appointed as Acting Executive Director PID.
However, Eneife last year got back the vacant position of Executive Director PID a position which Mr. Aleru was occupying before he was eventually made the Managing Director of the authority.
In view of the fact that the present MD was supposed to retire on June 28th 2014, the two major actors, Eneife and Azikiwe engaged each other in the battle over who takes over from Aleru.
The two top officials, The Tide gathered are exploring all their states and National connections to get an edge over each other.
Infact, Eneife is said to have made Abuja his second home since the battle began as he wants to take advantage of the influential positions of his former bosses, Alamieyesieha and Jonathan to outwit Engineer Azikiwe in the onslaught.
The Tide also gathered that Abuja, undecided yet on what to do, had asked Aleru who ought to have retired on August 28th 2014 to hold on to the office as MD while serious consideration is going on, on the right person amongst the two top executive directors to be appointed as the new managing director.
Our dependable source accused Aleru of exploiting the crisis situation to elongate his stay by instigating the imbroglio, the more.
Workers in the authority are also said to be helpless in terms of influencing the situation as the union itself is said to have remained in serious squabble.
For the past three years, the workers’ union Chairman, PC Ever, according to sources, could not summon a successful general meeting because he does not enjoy the support of a majority of the workers.
This ugly situation is said to be going against the fortunes of NDBDA as the authority is said not to be able to commission in Niger Delta a single water project for the past eight years, since late Robert Allen left as managing director.
Some of the workers who spoke to The Tide on condition of anonymity expressed the view that only an entirely new person from outside the present management could move the authority forward because of the bad blood that would ensue when one of the two top officials angling for the highest position is favoured.
“All we need from the Presidency is an entirely new person to be appointed as MD. There is a lot of rot and malaise in the area”, said one of them. 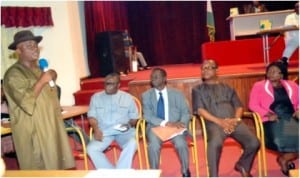 We’re Out For Job Creation -RIWAMA