As the wind of politi
cal change continues to blow across Rivers State, some members of the defunct Peoples Democratic Party Core Supporters Network (PCSN), have decamped to the All Progressives Congress (APC) in the State.
The group led by MacClinton Halliday paid a courtesy  call on their former leader, Chinda Evans Ogbuji in Port Harcourt.
Halliday, said the decision to decamp to APC was occasioned by the exit of its state coordinator, Hon Ogbuji from PDP to APC.
Halliday said that there was no need to remain in PCSN or PDP, since they were not expecting any better deal from their former party, the PDP.
He remarked that their former boss had excellent leadership qualities, hence, the decision to join him in his new party, the APC.
He said the critical search to fill the gap the Ogbuji’s exit created had caused them serious psychological trauma, saying that it was difficult to find someone that could match him.
According to him, the membership of the group cut across the 23 local government areas of the state, promising to make APC the party to beat.
Ogbuji who was former chairman Board of Trustees of Rivers Youth Movement (RYM) charged the new APC members to be bold and committed towards the actualis ation of their dreams.
Describing the APC as a people –oriented party, he urged them to put in their best and ensure that their efforts and support were doubled for Amaechi more than the days they were in PDP.
“APC has the true interest of Rivers People at heart wherever Amaechi goes, there we will go,” he said.
He thanked them for their visit, saying that the move is a demonstration of love and trust reposed on him.
It would be recalled that the leadership and members of the Rivers State Leadership Advancement Foundation (REVLEAF) in Egbeda Ward 11 also paid a courtesy call on Ogbuji recently at the council headquarters of Emohua local government area. 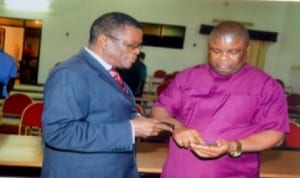