Rivers State Governor, Rt Hon Chibuike Amaechi has urged citizens of the state to remain calm as the State Government has the capacity to tackle the menace of Ebola disease.
He gave the assurance shortly after visiting the Ebola Isolation Centre in Oduoha Community yesterday in Emohua Local Government Area.
Amaechi said, “I am not saying that Ebola virus is bad as we think, and it doesn’t just kill the way people think. Professional doctors have said, if Ebola virus infection is well managed, the possibility of tackling the virus is there.”
Calling on citizens not to feel shy to report any symptom of infection through the state emergency lines, Amaechi noted that doctors are at hand to attend to patients.
He said plans have been concluded to upgrade the facility to enable experts and professional medical doctors properly manage and control the spread of the Ebola virus in the State.
Amaechi assured that the involvement of technical partners like the World Health Organization (WHO), Medicins Sans Frontieres (MSF) also know as Doctors Without Borders, the American Embassy and the Federal Government will ensure drastic measures are put in place to tackle and eliminate the disease.
“This is a temporary approved quarantine site for the Ebola virus and we are working on it to upgrade the facility. The place is a bit out of town and we want to start from here while we continue to search for a permanent site.  I am going to address the State on the issue.  I am not saying that Ebola virus is bad as we think and it doesn’t just kill the way people think. Professional doctors have said, if the Ebola virus infection is well managed, the possibility of tackling the virus is there. The World Health Organization (WHO), Doctors without borders, the American Embassy and the Federal Government are involved and so we are sure and confident that we will control the Ebola virus from spreading and possibly eliminate it in our state,” he said.
“I don’t want anybody infected to feel shy and possibly take it to the rural areas because it could affect your children, family and relations and any result to death. That will be too disastrous. When you have high fever you cannot account for, please don’t go to any Primary Health Center, come to the corridors of government and our doctors will pick you and give you adequate treatment,” he said.
He lauded the people of Oduoha Community for assisting government to fight the menace, assuring them that the disease is not airborne hence they should not panic at the location of the Isolation Centre in their area.
Meanwhile, Rivers State has now recorded two cases of Ebola infection in the state.
These include the medical doctor who attended to a diplomat who visited Port Harcourt two weeks ago and his wife.
An autopsy test carried out on the body of the late medical doctor, Dr Ikye Enemuo, who treated the diplomat revealed he died of Ebola disease Commissioner for Health, Dr Sampson Parker announced on Thursday to journalists in Port Harcourt.
“A few hours ago the result of the test carried out on the medical officer showed it positive of Ebola virus,” he declared.
Dr. Parker revealed that the widow of Dr. Enemuo, a medical doctor had equally taken ill after contracting the disease from her husband and had been quarantined with about 100 persons currently being placed under watch.
According to him, those in the watch list may have made contacts with the dead medical officer either through the clinic or the hotel where the diplomat was housed.
Explaining how the disease came into the state, Parker stated that a staff of Economic Community of West African States (ECOWAS), who had made contact with Patrick Sawyer in Lagos, visited the state and was checked into a hotel from where he was attended by late Dr Enemuo.
Explaining how the scourge came into the state, the Health Commissioner disclosed that the diplomat had consulted Dr. Enemuo due to illness from where he checked into a hotel. Enemuo took ill after the departure of the diplomat who is now fully recovered.
It was the physician who was taking care of Dr. Enemuo that became suspicious after his colleague showed signs of diarrhoea, fever and stooling and died two days later on 22nd August.
Already, the Health Commissioner stated that the hospital and hotel have been decontaminated in an effort to check further spread of the disease.
He therefore assured residents of the state to remain calm and go about their normal businesses as government was on top of the situation.
Parker added, “ Ebola is not a chronic disease once you are treated you are immune. We have more people who have survived than those that died, but people must avoid unnecessary bodily contacts and maintain strong hygiene”.
Noting that, “We have all the material and human resources to fight and defeat the deadly virus. Officials of the Federal Ministry of Health and other international agencies are already working with the state Ministry of Health.” 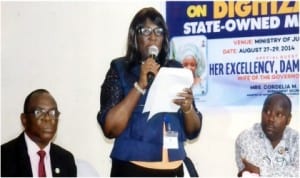