Rivers State Governor, Chibuike Amaechi says his tour of wards in Obio/Akpor Local Government Area was to find the true position of things in the state and gauge the people’s feelings.
He also revealed that the tour was halted due to the loss of Caretaker Committee Chairman of Port Harcourt City Council, Charles Paul Ejekwu a fortnight ago.
Speaking at the tour of Ward 1 Oroigwe yesterday in Obio/Akpor Local Government Area, Amaechi said the tour was for the interest of Rivers people.
He said, “One good thing about this tour does to me is to know the truth.”
Amaechi while responding to the speech made by the ward spokesman, Chief Sydney Nyeche, promised to construct the Eliohani/Rumunduru Road since Oroigwe Road project was still in the courts, arguing that until the legal process was settled before it will be constructed by government.
He assured that latest by October construction work will commence, hinting that government will consider sitting a model secondary school when once the community provides the land.
He proceeded to Ward 4 in Rupkokwu and Eneka communities where he reiterated the aim of his tour, “we are on this tour to see what we have done and what we have not done”.
The governor blamed the poor state of roads in the ward, especially the Eneka/Rukpokwu Road as the handiwork of greedy politicians who were awarded contracts to build the roads in their communities but decided to do shoddy jobs.
He, however, promised that remedial measures will be carried out as soon as the rainy season subsides to reduce the plight of the people.
Governor Amaechi also promised to build more schools to accommodate children following the rising population in the area.
The governor later visited Rumuokoro Ward 7, where the spokesman, Chima Wogu, decried the deplorable state of Rumuogholu Road and completion an ongoing of model primary school.
The Rivers State governor responded that already the state government has commenced plans to reconstruct the Rumuogholu Road, but noted that this time it will be awarded to a non-indigenous firm in order to avert shoddy job from politicians who are now in the opposition,” the only promise I will make to you no matter how bad it is, the Rumugholu Road will be done.”
He was given rousing welcome at Rumuigbo Ward 12 where he promised to construct the Rumoimoi/Rumuola Road.
Responding to request made by the Ward spokesman, Chinedum Amadi, the governor hinted that soon the area will enjoy better power provision, but blamed the Federal Government for frustrating the state government effort in providing power to the people.
“In the next three weeks, there will be regular power in Trans-Amadi , Rumuomasi. We will go to Town and Diobu, but before November it will get here.”
At Rumuola Ward 13 he warned land encroachers at Government Girls Secondary School Rumuokwuta and maintained that government will recover them. He reiterated his promise to complete the link road between Rumuola and Rumumoimoi.
Meanwhile, at Rumuepirikom Ward 9, Governor Amaechi, urged the people to stand up and demand for accountability from their leaders, saying the days when voters were cowed to vote was over.
Amaechi held that instead of resorting to violence those seeking elective offices should campaign and convince the people.
“Rise to the occasion and vote good leadership” he urged the people, saying time for liberation has come. 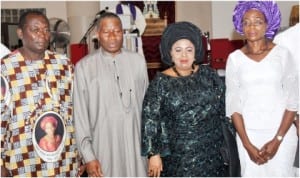 Ebola: FG Directs Schools To Remain Shut Till Oct 13 …Only One Case Left In Nigeria – Minister