The Federal Government yesterday directed that all public and private primary and secondary schools should remain closed till October 13.
The Minister of Education, Malam Ibrahim Shekarau, gave the directive when he briefed newsmen after a meeting with Commissioners for Education in Abuja.
“The minister and all commissioners met today, August 26, to discuss issues related to the reopening of schools for the new academic year vis-à-vis the Ebola epidemic issue.
“At the end of the meeting, the following decisions were arrived at as preventive measures to ensure the safety and wellbeing of all students in our schools throughout the federation.
“All primary and secondary schools both public and private are to remain closed until Monday, October 13, 2014, which is the new resumption date for all schools throughout the federation.
“This is to ensure that adequate measures are put in place before the students report back to school,’’ Shekarau said.
Shekarau said the meeting also agreed that all Ministries of Education should immediately organise training for at least two staff in each public and private school.
He said schools must ensure that the training was given by appropriate health personnel on how to handle any suspected case of Ebola Virus Disease (EVD).
He said the training of such staff must be concluded not later than September 15.
The minister also directed all the state ministries to establish a Working and Monitoring Team and also appoint a designated Desk Officer on Ebola.
Shekarau said the officers must report on daily basis to the commissioners on situation in the schools not later than September 1.
He also ordered the immediate suspension of ongoing summer classes conducted by some private schools.
According to him, all private primary and secondary schools must comply with the directives, which also apply to Federal Government Colleges.
He, therefore, urged state governments to support their ministries with all necessary funds to ensure effective implementation of these measures.
Shekarau said that all tertiary institutions were advised to suspend exchange of staff and students’ programmes, visits, and major international seminars and workshops until further notice.
“They are to monitor movements of foreign students in their campuses and liaise with appropriate government health institutions to organise and ensure effective sensitisation programme for all their staff,’’ he said.
The minister said that he would be meeting again with all the commissioners on September 23, to review the situation in all states.
He said that appropriate sanctions would be taken against any defaulter of the directives.
Meanwhile, Health Minister, Prof Onyebuchi Chukwu, said in Abuja yesterday that only the spouse of a doctor who had died of the Ebola Virus Disease, was now being treated at the Isolation centre in Lagos State.
Chukwu, who addressed journalists in company with his counterpart in the Ministry of Information, Mr. Labaran Maku, said that a male doctor and a female nurse who were primary contacts of the late Patrick Sawyer, were discharged on Monday.
He said, “Nigeria has only one confirmed case of EVD, a secondary contact of Patrick Sawyer, and she is the spouse of one of the physicians who participated in the management of the index case.
“She is stable but still on treatment at the isolation ward in Lagos.
“So far, all the reported cases of the EVD in Nigeria have their root in the index case, the late Sawyer.
“This is an indication that, thus far, Nigeria has contained the disease outbreak”
He denied reports not in The Punch, that a younger sister of the late Dr. Ameyo Adadevor, had been infected with the virus.
He noted that out of 13 confirmed cases so far in Nigeria, five persons, including the late Sawyer had died while seven had been successfully managed and discharged.
Chukwu reassured Nigerians and the global community that Federal Government shall remain vigilant and continue to work with partners to ensure that the disease is totally kept out of the country. 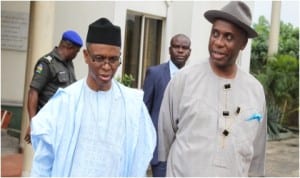 RVHA May Recommend Dissolution Of Primary Healthcare Board