Last year 2013, the na
tive and vogue initiative made its maiden debut in Port Harcourt, organizers and potential participants no doubt had their initial fears as to what the success rate would look like, but the Commissioner for Information ably represented by the Permanent Secretary of the Ministry of Information, Mrs Cordelia Peterside, déclares  that “last year it went well which is a reason for the hosting of a second edition.”
Mrs Peterside made this declaration last week in Port Harcourt at the unveiling of the Faces of Native and Vogue International Fashion Week 2014, preparatory to the main event which comes up September 19-21, 2014, at the Hotel Presidential, Port Harcourt.
Searching for the mysterious and unusual traits, 24 years old NYSC member, Joy Adoki was overwhelmed with excitement as she was presented to the press last week in Port Harcourt as the winner of the female category of the Face of Native and Vogue International Fashion Week 2014 by its organisers.
The 5ft 11″ elegant lady, with scintillating sets of legs, sweet to behold, has by this development, earned the sum of five hundred thousand naira only and automatically becomes the Face of Native and Vogue International Fashion Week 2014 and Rivers State Youth Ambassador.
She will be privileged to attend all Rivers State Government functions and be part of all communication and production as may be required of a model. She has the rare opportunity to walk the ramp alongside international and renowned models.
As the Face of Native and Vogue, Joy Adoki has got the opportunity to model designs of frontline designers and be the face on all Native and Vogue communication materials for the fashion week for a whole year.
For the male category of the Face of Native and Vogue an elegant, confident, Dennis Atiegoba, carted the trophy. A 6ft tall, 22 year old student Dennis Atiegoba will also fly the Rivers State Youth ambassadorial flag of Native and Vogue International Fashion Week for a whole year and all that were good for the geese, would also be good for the gander.
It is interesting to note that a platform was also provided for young designers to compete from where ten top budding designers were picked; six female and four male of Rivers State origin or residing and doing business within the state and between ages 18 and 30 years.
The emergence of these ones as top ten designers affords them the privileges of scholarship to an international fashion school, one year mentorship with renowned fashion designers, automatic FADAN membership and fashion designs in notable fashion magazines.
The Native and Vogue project is a 3-day fashion week that primarily brings together already established fashion designers from Nigeria and beyond who will showcase their wares.
It serves as a base and spring board for the upcoming and aspiring designers to cease the opportunity of a career launch after undergoing a short tutelage under the already established designers. 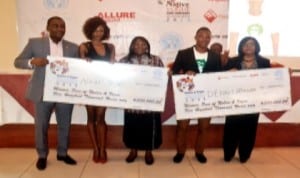