The Nigeria Labour
Congress (NLC), has expressed deep disappointment that after 15 years of uninterrupted democratic rule in Nigeria, serial acts of impunity, abuse of human rights, harassment of the media, disruption of peaceful protests, among other uncivilized conducts by the Federal Government still remain the order of the day.
Making their feelings known at the weekend in a communiqué issued at the end of their Two-Day National Executive Council (NEC) meeting in Enugu, the NLC members also regretted that “there is little to show as dividends of democracy since the inception of the civil rule in 1999 till date”.
The communiqué which was jointly signed by the NLC president, Comrade Abdulwahed Omar, and the Acting Secretary- General, Comrade Chris Uyot, equally expressed concern over the alarming security challenges currently confronting the country, especially in the North East, “where insurgents have continued to pillage the land and in the South- South where unabated crude oil theft has all but left the economy prostrate”.
On the outbreak of Ebola, the NLC, however, hailed the federal government for the proactive measures it had so far taken in checking the spread of deadly Ebola Virus, stressing that it should also do all that was necessary to secure the entire populace.
The body, also advised government to ensure that 2015 general elections would be the polls that will be free, fair, credible and generally acceptable to the people of Nigeria, as Nigeria now more than ever, very conscious of their rights as citizens.
According to the communiqué, the congress also resolved to take control, revitalize, and strengthen the Labour Party (LP) in line with the ideals of labour and its ideological preference.
It expressed its readiness to support and encourage all her members preparing to go into partisan politics in 2015.
Their words: “The NEC- in session, commended the Independent National Electoral Commission (INEC) for its improved performance in the conduct of elections, but cautioned against the over militarization of election zones in the country as it could be counter-productive”, and accordingly urged government to take note.
The NLC, therefore strongly advised the federal government to discontinue with such worrisome development in future elections in the country, particularly the 2015 general elections. 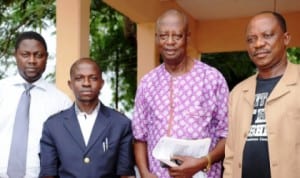