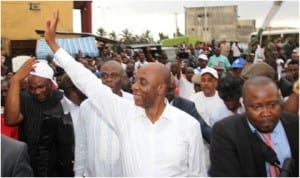 Rivers State Governor Chibuike Amaechi salutes the crowd in Rumukurushi community, during his ‘meet the people tour of Communities in Obio/Akpor Local Government Area of the state, last Tuesday