Twenty One Governorship aspirants of the Peoples Democratic Party (PDP) on Saturday shunned the directive from the state Chairman of the party, Brother Felix Obuah not to attend the meeting summoned by the Rivers Mainstream Coalition
The National Coordinator of the Rivers Mainstream Coalition, Professor Isreal Owette said the party has no right to direct the aspirants not to attend the meeting which was aimed at ensuring fairness, harmony, peace and unity in the state and among  aspirants.
Prof. Owette who spoke to The Tide yesterday while reacting to the comment by Brother Felix Obuah, however explained that the meeting was successful and achieved its purpose as 21 aspirants were physically present, three sent in representatives while two sent in apologies.
Brother Obuah had said that the PDP in Rivers State does not know the body known and called Rivers State Mainstream Coalition.  According to him it is not one of the bodies that have been collaborating with PDP in the state. Obuah said that the body is a stranger to the party.
He also threaten to sanction the conveners of the meeting,saying, “given the seriousness the party attached to membership constitution and respect to others, we have commenced investigation, if Chief Bekinbo Soberekon and Prof. Owette who jointly signed are members of the PDP in Asari Toru and Eleme Local government Areas and the finding shows that they are members of the party, we will take appropriate action by inviting the relevant portion of the party constitution to address this rascality’’.
But the former Commissioner said the purpose of the meeting was to bring all aspirants to understand that they need peace.
According to him, ‘’we don’t need violence, we need harmony, justice, and because of these, we have to work as a group and whoever wins the ticket should carry others along and we will achieve it because all aspirants agreed to work together and that whoever wins will carry others along”.
He said that the purpose of the meeting was to liberate Rivers State and bring peace , justice, harmony and unity among the aspirants, adding that the body was determined to forstall what happened last week where houses were destroyed and children used as shield for bullets.
He regretted that the Chairman of PDP in the state and the Minister of State for Education, Chief Nyesom EzebunwoWike’s Grassroots Democratic Initiative (GDI) were hunting for the soul of Rivers State pretending to work for President Goodluck Jonathan and the PDP in the state.
‘’I maintain that Rivers State is not for sale and those working or pretending that they are working for President Goodluck Jonathan should watch out, they are enemies of progress”.
Prof Owette however maintained that the aim of Rivers mainstream was to bring fairness, justice, peace and unity in the state by indicating that the state must be fair to all ethnic groups, and south east zone where Eleme Local Government Area is one  as well as the Ogonis and Andonis. He said the party must be fair also to the riverine people who have never produced a governor
He said the organisation stands by it and those principles to liberate Rivers State from the grip of thieves who have collectively collected the state’s resources, leaving the masses to suffer in abject poverty in the midst of plenty.
‘’Those invited are all members of the PDP who have their campaign organisations but were unable to speak out because of the leadership of the party. If you speak, Wike pulls you down, members of PDP should arise and take up the fight for political freedom where everybody will express what he has’’, he noted 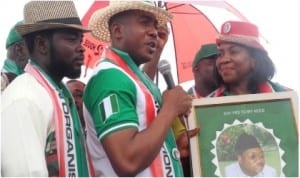 L-R: Director-General, House-2-house Campaign Organisation for Democracy, Mr Ben Ogidi, Senior Special Adviser to the President on Youth and Student Affairs, Mr Jude Imagwe and member, Board Of Trustees of the organisation, Mrs Aisha Audu-Ueje, at the House-2-House rally in Abuja last Saturday.

Playing Politics With Nat. Security …How Not To Honour Nigerian Troops