The Port Harcourt Interna
tional Airport, Omagwa, medical centre which went comatose some years ago, has been renovated, refurbished and commissioned to cater for the health needs of airport users and the host communities.
Speaking at the occasion which also featured the flag-off of medical outreach-sponsored by Mobil producing Nigeria (MPN) for airport host communities, the Regional General Manager, South/South East, Federal Airports Authority of Nigeria (FAAN) Mrs. Ebele Okoye, said the clinic will serve local and foreigners who take ill while on board or about to board.
Mrs. Okoye disclosed that on assumption of duties in October 2012, the clinic was far from being the best, because there were no beds suitable for patients, those available came with the airport in 1979, and lauded Mobil producing for the support.
The Regional Manger who panted a pathetic picture of the old medical clinic said the building became too small and dilapidated, for an international airport, stressing that Mobil Producing Nigeria (MPN) intervened after the management of FAAN made a request to them for assistance.
“What the company has done will always be remembered when the story of our airport is told whether now or in the future,” she contended, and urged other corporate organizations to identify with the airport and address some areas of need.
She also lauded the host communities for the cordial relationship that exists between them as issues of concern are resolved amicably and solicited for continued cooperation with the airport to record feats hitherto unheard of in the area.
In his opening remark, the Manager, occupational health, Mobil Producing Nigeria (MPN), Dr. Ayodele Fagbemi, said the project was in response to a request from the management of FAAN to assist in developing projects in the area.
Dr. Fagbemi indicated that the project at the airport and the free health care for the three neighbouring communities costs bout N28 million to accomplish.
The chairman Omagwa council of chiefs and former chairman airport landlords association, Eze Bright Kinikanwo Kpalukwu, lauded the company for embarking on the programme and requested for construction of a town hall and scholarship to their children. 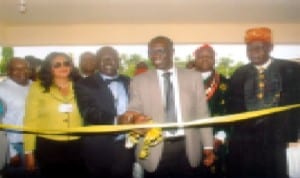