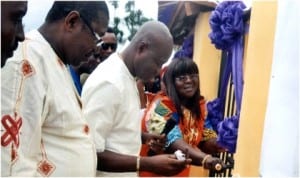 Rivers State Commissioner for Information and Communications, Mrs Ibim Semenitari, commissioning the water project built by her in Okrika last Friday. With her are Rivers Deputy Chairman, All Progressives Congress, Prince Peter Odike (left) and other personalities. Photo: Chris Monyanaga