The Imo State Govern
ment has denied ever giving a dud cheque of N50 million to the Catholic Archbishop of Owerri, Most Revd. Anthony Obinna, describing the allegation by a popular priest, Fr. Ejike Mbaka, as a calculated attempt to blackmail Governor Rochas Okorocha and the government of the State.
This was just as the Director of Social Communications of the Catholic Archdiocese of Owerri, Fr. George Nwachukwu, said Mbaka could not speak on behalf of the diocese as he was neither a spokesperson of Archbishop Obinna nor a priest of the diocese.
Mbaka was alleged to have said on Sunday during a thanksgiving by former governor of the state, Chief Ikedi Ohakim, at the Christ The King Church Parish, Enugu, that Governor Okorocha gave the Archbishop of Owerri Archdiocese, Anthony Obinna, N50 million dud cheque.
But, in a statement, signed by Mr. Sam Onwuemeodo, senior special assistant (Media) to Governor Okorocha , the government dismissed the priest’s allegation as spurious and an unholy blackmail against Okorocha and the government of the state.
The statement read in part: “Let us simply aver and solemnly too, that the claim is not only false, but spurious and curious in many respects. There is no iota of truth in the allegation.  You can call it an ‘unholy blackmail’ taking into account the person behind it.
We challenge Mbaka to go beyond his claim and provide the proofs since cheques are not invisible objects. With this latest blackmail, Nigerians of goodwill would now begin to appreciate the orchestrated and politically motivated lies being unleashed against Governor Okorocha’s government by those desperate to take over power from him in 2015.”
The government wondered what Mbaka wanted because he was neither a priest in Imo nor diocesan priest of Owerri Catholic Archdiocese.
“It is important to also state that since the false claim on the N50 million dud cheque did not come from the Archbishop of Owerri Archdiocese, Anthony Obinna, or from any of the priests in the archdiocese, it becomes reasonable for us to make do with our candid denial. But honestly it hurts and calls for a lot of concern when a priest, a well known one for that matter, begins to feed innocent flocks with induced lies”, the statement added. 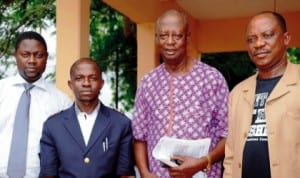