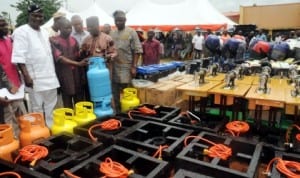 Empowerment equipment to be distributed by Ibadan South-West Local Government council in Ibadan.

Pension Transitional Arrangement Directorate (PTAD) has said it had plugged sources of misappropriation of pension funds in the agency.
Director-General of PTAD, Mrs Nellie Mayshak, made this known at the Sensitisation Workshop for Treasury Funded Parastatals and their Pensions Board of Trustees it organised in Abuja.
Mayshak recalled that before the establishment of the directorate by the Federal Government in 2013, the administration of pension funds in the country was plagued by cases of embezzlement.
She explained that PTAD was established to cater for pensioners under the old pension scheme of Pay as You Earn (PAYE).
“There has not been a single incident of misappropriation of pension funds since PTAD was established and there will never be.
“What has contributed to this is that we have put in systems that have completely eliminated pension officials from physically accessing pension funds.
“Every payment is done electronically through ‘GIFMIS’, from the office of the Accountant General of the Federation,” she said.
Mayshak said that for the electronic payment to be effective and sustain its transparency, pensioners needed to submit their correct account details.
She said that the directorate had put mechanism in place to track and solve non-payment problems often raised by pensioners, and stressed the need to obtain data of every existing pensioner under the old scheme.
“I did not inherit any data base of pensioners when I came into office. Currently, we have a lot of challenges with the payroll we are using to pay pensioners.
In his speech, the Head of Civil Service of the Federation, Alhaji Bukar Goni, urged PTAD to establish call centres for easy enquiries and feedback from pensioners.
Goni, who was represented by the Permanent Secretary, Common Services in his office, Mr Yemi Adelakun, said, “the time when people have to travel all the way from Maiduguri, Calabar, to Abuja just for information is over
“President Jonathan, during the World Pensions Summit advocated for immediate digitisation of the pension administration.
Also speaking, the President, National Union of Pensioners, Dr Abel Afolayan, said that the establishment of PTAD had revived pensioners’ hope in the administration of pension funds in the country.
He commended President Goodluck Jonathan for establishing PTAD, saying, “it will go down in history that the president is pensioners friendly.
“I am glad to note that this programme will be held in the six geo-political zones,” he said, adding that it would give PTAD the opportunity to get first-hand information on pensioners’ plight.