The Ijaw youths, under the
auspices of Ijaw Youth Council Worldwide, have rejected the posting of their graduates to the northern part of Nigeria to undergo the one-year compulsory national service for 2014/2015.
The IYC said on Monday that it was reckless and unpatriotic for the board of the National Youth Service Corps to post youths from the southern part of Nigeria to the North, considering the high level of insecurity in virtually all the states of the region.
The rejection by the Ijaw youths came on the heels of similar rejection by concerned parents and guardians in Bayelsa State.
Last Saturday, a group of Bayelsa parents and guardians, led by the National Women Leader, United for Goodluck Success Campaign, Mrs. Favour Alafuro, took to the streets of Yenagoa, Bayelsa State capital, to protest the posting of their children and wards to the North by the NYSC.
The protesters, marched through the popular Yenagoa-Mbiama Road to the office of Punch Newspapers in Yenagoa, said they feared that their children’s posting was like going on a mission of no return.
They asked the relevant authorities and the NYSC to review the posting without hesitation and vowed not to stop their action until the review of the posting.
They added that they had invested heavily in their children to allow them to be wasted like animals by the unrepentant insurgents in the North.
The protesting parents, who called on the federal and state governments to intervene in their collective concerns and prevail on the NYSC authorities to drop the idea, said it was curious that over 95 per cent of youths, who graduated from the state-owned Niger Delta University, were posted to the North.
They noted that the posting was an alleged ploy to decimate their youths in the troubled northern region.
The Ijaw youths said, “The IYC maintains its earlier position that Ijaw graduates and anybody from southern Nigeria should not be posted to the North and that the NYSC scheme should be reviewed to ensure that youths serve in their region.
“The idea of national integration which necessitated the posting of youths to different parts of the country cannot be used as a justification to post Ijaw youths to the North in the present security situation,” they added.
The youths warned that any threat to the lives of Ijaw youths as a result of NYSC’s board alleged recklessness would be visited with dire consequence from Ijaw youths.
They vowed that the youths would not accept a situation where Ijaw youths were killed in the North, while northern youths were enjoying in multinational oil companies in Ijawland and the Niger Delta region. 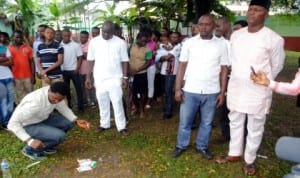