Abia State Polytechnic
Chapter Of Academic Staff Union of Polytechnics (ASUP) on Thursday said it would resume its suspended strike without notice if its Governing Council did not meet its demands.
This is contained in a letter jointly signed by Mr Precious Nwakodo, and Mr Kalu Uma, the chapter Chairman and Secretary, respectively. The letter, dated July 21, 2014 and addressed to the Chairman, Governing Council of the Polytechnic, was made available to newsmen in Aba.
The letter said,” the union at its emergency congress held on Thursday, July 17, resolved to suspend its strike for three weeks from July 22.  This decision was largely informed by the confidence members have in the leadership of the governing council that it will fulfill its promise to pay additional two months salaries on or before Aug. 11 and also address the issue of irregular payment of staff salaries.  “It is also the expectation of the union that within this period, council and management will start meeting the demands of the union.”
According to the letter, the union also demanded for visible mechanisms to improved management of the polytechnic’s resources.
It called for the provision of a concrete ceiling for expenditure approved for both management and council.
ASUP further seek a return to due process and extant rules in the general administration of the polytechnic.
The union also demanded the implementation of the report on Abia State Polytechnic Staff Certificate Verification as well as the release of its 2014 staff promotions list.
The union expressed the hope that the council’s strong desire and commitment to return the polytechnic to the paths of progress would be realised.
It, however, urged the council to do the needful to forestall a possible break of activities.
Also staff of Projects Development Institute (PRODA) Enugu, at the weekend as the three unions have resolved to resume their suspended strike.
The workers alleged failure of the management and Governing Council to address staff welfare, which they said, had been on for the past 24 months.
At the end of their meeting in Enugu, the three unions –Academic Staff Union of Research Institutions (ASURI), Senior Staff Association (SSAUTHRIAL) and Non- Academic Staff Union (NASU), accused the management of insensitivity, flagrant disregard for staff welfare and grossly unsatisfactory conditions of service.
A case in hand, they alleged, was the abandonment of a female staff, Miss Nmaju Chiagozie Eunice, who on March 25, 2011 sustained injury on her left eye while undergoing table analysis in the Chemistry laboratories.
They stated that since the incident, the unions had made several efforts to get the management to assist her financially to enable her undergo surgery to no avail, stressing that the woman’s situation has degenerated, “to an alarming stage because of lack of funds and adequate attention”.
The unions also alleged delayed staff confirmations and advancements, non- payment of the statutory 28 days in lieu of accommodation and transport to new staff, discriminatory and non-standard criteria for staff conversion and non-implementation of grade level skipping – CONRASISS 9 to CONRAISS 11 among others.
Other issues they highlighted include “improper pension and remittances to the Pension Fund Administrators (PFAs), non –implementation of mandatory pre-retirement leave, the board’s and management’s total disregard for due process and the federal character policy in surreptitious staff employments, and non- implementation of employees’ Right to Life Insurance and other friendly government circulars”.
The workers said following management’s inability to act, they resolved to embark on peaceful protest last month, adding that rather than find ways to address the issues, management invited the police to stop the demonstration.
The unions which though were not specific on the date for the resumption of the strike, accused management of feeding the public with half truths on the activities of the institute, stressing that the agency under the Federal Ministry of Science and Technology had been unable to fulfill its mandate.
Efforts to reach the Acting Director-General, Mr. Charles Agulana yesterday on the development were unsuccessful. 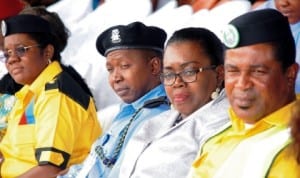