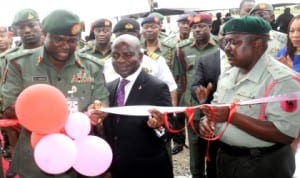 An alleged N100million cash given to parents of abducted Chibok girls by President Goodluck Jonathan after a meeting at the Presidential Villa on July 22 has sparked disagreement between some of the parents and leaders of the community in Abuja, our sources have reported.
The Presidency, the report said, released the funds to leaders of the Chibok community in Abuja for onward passage to parents of the kidnapped school girls.
But some of the parents are now alleging that they were short-changed by the community leaders.
One parent, who was among those who visited the president, told our source that he got only N200,000.
“I got only N200,000 out of the said N100million allegedly received by our leaders in Abuja. Some of us got N300,000 and some less than that,” he said.
He also said that he was not comfortable with the way the money was shared among the parents of the kidnapped girls and that he was short-changed.
“Our leaders in Abuja are using the girls to enrich themselves. In fact, some of the parents were screened out of the entourage by the Chibok leaders in Abuja. Many of them were residents of Abuja, not parents of the kidnapped girls,” he said.
Another parent, who was screened out of the delegation that visited the president, said he got only N7,000 out of the money shared.
“I was at the farm when they brought the N7, 000 to my house, and I collected it. Some of us got even less, N3,000 and below,” he said.
The parents stressed that they were not selling their daughters and that the money from the President just came to them without their asking for or expecting it.
One of the community leaders, Pobu Bitrus, who is also a member of the House of Representatives, was at the meeting with the president.
He explained that after meeting with the president, monies were distributed to the parents in envelopes.
“After we met with the Presidency, the parents were given monies in envelopes, and that’s all. All other things they are saying about N100million, I don’t know about that,” Bitrus said.
Spokespersons for the President on Media and Publicity, Dr Reuben Abati and Public Affairs, Dr Doyin Okupe, could not be reached for comment on the story.
It would be recalled that after about three months of prevarications, President Jonathan finally agreed to meet with the parents of the abducted girls after he was persuaded to do so by the Pakistani teenager who champions the cause of girl-child education, Malala Yusoufai.
The Presidency has faced intense criticism over its handling of the kidnap of the Chibok girls who have been held by the extremist Boko Haram sect since April 14.