Any attempt by the
Federal Road Safety Commission to arrest or impound any vehicle which does not carry the new vehicle number plates introduced by the RSC shall be resisted, a lawyer, Mr. Emmanuel Ofoegbu, has threatened.
Ofoegbu, who is accusing the FRSC of being contemptuous to an order of the court which had restrained the commission from enforcing its new number plates on motorists, also said that it has no respect for the judgement of an Anambra State High Court which had recently empowered the FRSC to enforce the new number plates.
The lawyer said such enforcement by the  FRSC would be overreaching the pending judgement of the Appeal Court  on issues bothering new vehicle number plates which the FRSC has said it has now been empowered to enforce.
On september 30, 2013, Ofoegbu, through his lawyer, Ogedi Ogu, had filed a suit numbered FHC/L/S/13332/2013 before a Federal High court in Lagos seeking  to restrain the FRSC from arresting and impounding vehicles which did not have the FRSC’s new number plate.
In a judgement delivered on March, 26, 2014, Justice John Tsoho had granted Ofoegbu’s  prayers and held that it was unlawful for the FRSC to impose the new number plates on motorists, where there was no existing law permitting same.
The judge had held, “The issue of redesigning new number plates by the respondent, is not covered under the provisions of any law in Nigeria. The respondent cannot force Nigerians to acquire new plate numbers by impounding cars, without the backing of any legislation to that effect. I hold that the act of the respondent amounts to an arbitrary use of power, and is therefore illegal and unconstitutional.”
Dissatisfied with the judgment, the FRSC had approached the Appaeal Court to file an appeal numbered CA/L/412, seeking to upturn Tsoho’s judgement. At the Appeal Court, the both parties had filed their briefs and were waiting for the date of hearing.
But last week, it was published in some national dalies that the FRSC had now been empowered by the  order of an Anambra State High Court to enforce the new vehicle number plates.
The suit was reportedly filed by one Ajefo Ekwo against the FRSC and Justice Peter Umeadi had ruled that by the provision of the National Road Traffic Regulation 2012 and the FRSC Act 2007, the FRSC is empowered to issue new vehicle number plates and drivers’ lincence.
Reacting to the judgement Ofoegbu had however threatened that such judgement would not be respected by him in view of the pending appeal. 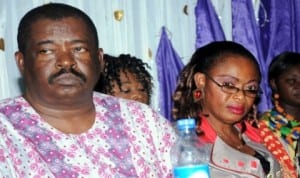