It is no gainsaying the fact
that the rave of the moment, David  Adedeji Adeleke famously known as Davido is currently the hottest artiste in Africa due to his hit singles and collaborations which have won him prestigious awards particularly MTV’s Mama and Bet International.
At 22 and less than two years, Omo Baba Olowo as he is fondly called has achieved so much for himself and from the hand writing on the wall, this is just the beginning for the Osun State born HRN Record label boss. Some of his achievements which qualified him as Africa’s best include:
Highlight performances which is  about 19 shows in a month and he charges N3.5 and N4 million per performance. He recently headlined Rwanda Annual Liberation Day celebration at Amahoro National  Stadium in Kigali where he thrilled a mammoth crowd and was received by the Rwandan President Paul Kagame.
His popular hit singles  included Dami Duro, Overseas, All of you, Ekuro, Gobe Skelewu, Aye Etc. for instance Aye’s Video is the most watched in You Tube Nigeria in the first  quarter of 2014, it recorded  over 300,000 viewers in the first week.
Davido’s major awards include BET International award, MTV’s MAMA, Koru Award, Channel O Music Video Award, Ghana Music Award, Nigeria Music Video Award, the headies Awards, Nigeria’s entertainment  Awards etc.
In a recent interview, the  music super star disclosed  that presently he has over 90 unreleased songs, but he is taking  his time to release them. He however  stated that he is going to have a big concert in December which will feature an  international artiste. 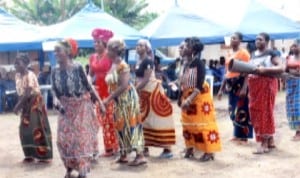 Ogba Women in a cultural dance