Thousands of people
from Rivers State and beyond are expected to throng the Deeper Life Bible Church Camp Ground , Port Harcourt, as the General Superintendent of the Church, Pastor William F. Kumuyi, arrives  Port Harcourt, for a three-day miracle explosion crusade scheduled to hold from Friday, July 25, to Sunday, July 27, 2014.
Briefing newsmen on the Miracle Explosion Crusade 2014, the overseer of the church in Rivers State, Pastor Andrew Osagie said that the visit will bring showers of blessing to the people of the state, stressing that the church was making arrangements to accommodate those coming from outside Port Harcourt.
The man of God said that during the crusade, families will be reunited while spiritual famine in the land will be tackled, adding that lives will be regenerated while many souls will be saved. Also, sickness and other afflictions will be healed, while those under bondage of the devil will be set free.
Osagie also took a critical look at the increasing rate of crime in the society and attributed it to the continuous erosion of the value system and population increase.
He said that God has promised mankind a problem-free world, noting that when Christ manifests, the problems confronting humanity will be solved.
Meanwhile, as part of sensitisation for the crusade, members of the church took to the streets of Port Harcourt on a rally, last Sunday.
Moderator of Olanada sub-Region of the church, Pastor Omueti Sunday said the crusade is a unique programme that offered the people of Rivers State a rare opportunity to host Pastor Kumuyi twice in a year despite his very tight schedule that takes him round the world.
He disclosed that the last crusade in February witnessed over 10,000 converts noting that this month’s crusade will feature seminar, workshop and worship sessions.
Also speaking, a group co-ordinator of the crusade, Pastor Israel Mkpaoro noted that the February crusade witnessed several miracles adding that, the recipients of those miracles will be available to testify to the mighty works wrought through Pastor Kumuyi.
He described Pastor Kumuyi as a unique servant of God who preaches salvation and urged journalists and others in the private and public sectors to avail them of the opportunity to embrace God who has seen their affliction and sent his servant to help them.
In his remark, another group co-ordinator, Pastor Eze Jameson, urged Christians to remain faithful to God to enjoy his miracles noting that miracles could be short lived if the recipient is not a fervent believer that has forsaken sin totally. 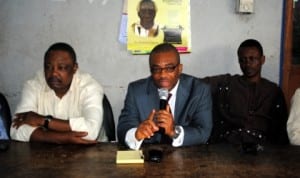