The Management of
Rivers State Council for Arts and Culture, a parastatal of the Rivers State Ministry of Culture and Tourism has decried the vandalisation and looting of the office of the Executive Director of the council, Chief Deede Baede.
Reacting to the incident which occurred in the night of Friday, 11th July, 2014, the management said the act was unfortunate and a plot to truncate the smooth administration of the council.
Director of Administration of the council, Mr. Innocent Doole Jacob, who commented on the incident, said two days before the attack, he was reported to the police by some staff for effecting a management directive to lock the main entrance gate to the council as part of security measures in the council.
The director of administration stated that for about six months the council has been wedged in crisis, as some staffs flout management directives, and consistently issue threat to top management officers, adding that the matter has been reported to the ministry for proper resolution.
Speaking on the issue, the executive director of the Arts Council, Chief Deede Baede, said he reported to his office on the morning of Friday 11 July 2014, and discovered that his office had been burgled and looted.
Chief Baede said the invaders destroyed the window protectors, and ransacked his office, removing many valuables including management files, personal files, money and other documents.
He said the incident has been reported to the police and investigation is ongoing.
The Tide learnt that the incident may not be unconnected with internal sabotage as some staff express displeasure over alleged management’s indifference in the crisis that engulfed the Arts Council chapter of Radio Television and Theatre Workers (RATIAWU) and the state council which led to the suspension of the chapter exco led by Suzi Accra Jaja. 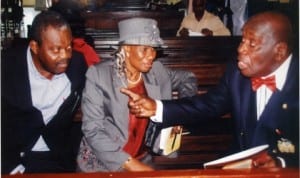