Notwithstanding the
glaring danger posed by the Ebola disease to Nigeria and the possibility of the virus spreading from other West African countries to the country, the Federal Government weekend allayed the fears of Nigerians, stating that efforts are in top gear to contain the disease.
Minister of Health, Prof. Onyebuchi Chukwu, told journalists in Abuja that government had put in place concrete steps to avert the spread of the epidemic to Nigeria.
Chukwu’s assurance came amid World Health Organization (WHO) warning that there are ominous signs that the disease may spread across the West African region, including reaching countries like Nigeria with higher population.
Giving a background to the origin of the disease, Chukwu said the virus “started from the Republic of Guinea and it spread to Liberia and also to Sierra Leone. This is the second time we are hearing story about its spread (to Nigeria) The first time, it was not true.”
The news of the outbreak of Ebola fever in some countries in West Africa, including several parts of Guinea, Sierra Leone and Liberia sent shock waves across the region. West African countries like Senegal have since closed their land borders to check inter-border spread of the disease.
With death tolls rising in the affected countries, Assistant Director-General of the World Health Organisation, Keiji Fukuda, recently described the outbreak as ‘one of the most challenging Ebola outbreaks’ the organisation has ever faced.
According to recent WHO figures, there have been 157 suspected cases in Guinea, 101 of them fatal, while 67 of the cases were confirmed in WHO laboratories. The disease has no known cure or treatment yet.
Former President of the Nigerian Medical Association, Dr. Osahon Enabulele, in an interview called on the Federal Government to seal the country’s borders so as to prevent the spread of Ebola virus in the country.
He said, “Anywhere you have movements of people, from one location to the other, the likelihood is high. That calls to attention the need for us to check our borders. More often than not, when there are movements to some of these affected countries, especially when there is a very defective, weak surveillance system at the entry points – land, air and sea – people from endemic regions are given access in the country.
With over 170 million people, mostly in crowded urban areas, a possible outbreak in Nigeria could be disastrous.
In the same vein, veterinarian virologist and President of the Nigerian Academy of Science, Prof. Oyewale Tomori, noted that Nigeria was at risk of an outbreak of the Ebola virus, considering that the affected countries are in West Africa. 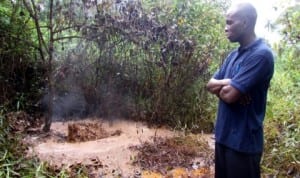