Few hours after his Deputy, Bala Ngilari tendered his resignation letter; Governor Murtala Nyako of Adamawa State has been impeached by the Adamawa State House of Assembly, bringing the weeks of intense debate over the governor’s fate to an abrupt end.
It would be recalled that Nyako has been in a political battle over his continued stay in office following allegation of gross misconduct levelled against him and his deputy by the highly dominated Peoples Democratic Party (PDP) state Assembly.
Nyako’s impeachment and Ngilari’s resignation, have created an opportunity for the Speaker , Alhaji Umaru Fintiri to act in the capacity of an acting governor.
His impeachment, however, followed the adoption of the report of the panel submitted to the House by 17 of the 25 members of the House.
Speaker of the House, Umaru Fintiri read the report on the floor of the House.
The report found the governor guilty of all 16 allegations of gross misconduct leveled against him.
Reacting to the report, a motion for the governor’s impeachment was immediately moved by Jerry Kumdisi, member representing Gombi constituency and was supported by the Deputy Speaker of the Assembly, Kwamoti Laori.
Consequently, all the 18 members at the meeting agreed with the resolution, and signed that the governor be removed.
It was further resolved that the Speaker, Fintiri, be sworn in as the state’s acting governor.
Meanwhile, the All Progressives Congress (APC) says the impeachment of the Adamawa State governor, Murtala Nyako, has no iota of value to add to the Nigeria’s growth and development, and even to the progress of Adamawa State.
In a statement by the chairman of the APC Governors Forum, Mr Rochas Okorocha, released hours after the impeachment on Tuesday, the party stressed that the impeachment of the governor was not what the country needed at a period it is faced with serious security challenges.
Governor Okorocha expressed surprise that in spite of appeals and steps taken by patriotic leaders across the country to make the members of the Adamawa State House of Assembly review their impeachment move against the governor, with a view to resolving whatever was the bone of contention, the legislators still carried out the impeachment.
“What the nation needs most this time should be ideas, unity of purpose and patriotism to deal decisively with the lingering security problems threatening our nationhood and not actions that would further inject bad blood among the leaders of this country and the citizenry in general.
“The impeachment of the Adamawa State Governor and similar impeachment threats against the governors of Nasarawa, Edo, Rivers and so on, could be explained as bad politics of intimidation aimed at stifling the APC as a party and threatening our nascent democracy,” the statement read.
The APC insisted that the impeachment was not a good image laundering for Nigeria, saying it will not encourage other nations willing to help Nigeria come out of the security problem to take  the nation serious.
The impeachment by the State House of Assembly members came after the lawmakers received the report of a panel set up to look at the allegations of financial impropriety against the impeached governor and his deputy, Bala Ngilari.
The Adamawa State House of Assembly’s speaker, Umaru Fintiri, has been sworn-in as the Acting Governor.
Earlier, the state Deputy Governor, Bala Ngilari, resigned from office to avoid being impeached.
Mr Ngilari’s resignation letter was read at plenary by the speaker of the Assembly, Umaru Fintiri, after which the lawmakers approved it. 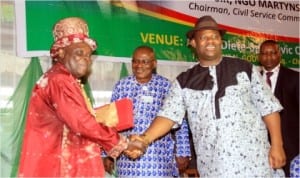