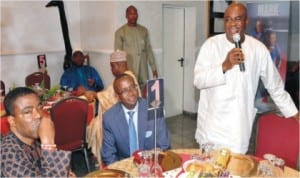 Senate President David Mark (right) speaking at the breaking of Ramadan fast by Senators at his residence in Abuja last Wednesday Night. With him are Sen.Ganiyu Solomon (left), and Leader of Senate, Sen. Victor Ndoma-Egba.

The crisis in the Rivers State chapter of the People’s Democratic Party (PDP) yesterday deepened following the emergence of a factional camp, which has secured an office in the state capital.
The Tide gathered that the new faction of PDP will soon commence activities, with the inauguration of its local government party chairmen ahead of the party primaries.
The new development is a follow up to the suspension of some founding members of the party who were rumoured to be nursing the ambition to contest the governorship ticket in the forthcoming primary of the party.
The Tide learnt that two members of the party, former transport commissioner in Rivers State, Hon Elemchukwu Obowu and former administrative officer of PDP in the state, Chief Lolo Ibieneye were suspended two months ago by the Brother Felix Obuah-led leadership of the PDP due to their position on zoning of governorship in the state.
The duo had kicked against an Ikwerre candidate in the next primary of the party, alleging that the party has been hijacked by the Minister of State for Education, Nyesom Wike, and his stooges.
Since their suspension, things have not been normal in the party in the state.
Our investigation shows that both Obowu and Ibieneye have demanded for an Ijaw or Riverine candidate after the present tenure of Governor Chibuike Amaechi, who they said emerged as an upland governor.
But in reaction to this, the Rivers State chapter of the Peoples Democratic Party (PDP), yesterday said that the Obuah-led leadership is still in charge, describing the move to factionalise the party as a criminal and crude attempt to blackmail the party.
The state Chairman of the PDP, Bro Felix Obuah, who stated this in a statement signed by his Special Adviser on Media, Jerry Needam, yesterday, said such plot cannot succeed because the PDP is democratically intact and does not have any internal squabbles.
Obuah, in the statement, warned against any act aimed at causing crisis in the state, stressing that both High Court and Appeal Court judgements recognizing him as the only constitutionally elected PDP chairman in the state still subsist.
The PDP state chairman stressed that the only State Secretariat of the party still remains No 23, Aba Road, Port Harcourt, warning that any person or group of persons parading as PDP state executive members except the one he superintends will be visited with the full wrath of the law.
He urged security agencies to be alive to their responsibilities by nipping any clandestine act aimed at  plunging the party and the state into another round of crisis in the bud to stave a political storm in the state.
“The PDP as a law abiding party will not succumb to blackmail and will stop at nothing to suspend members working against the interest of the party”, he said, warning “those behind the plot to desist forthwith’’.