The Deputy Leader of the
Rivers State House of Assembly, Hon Robinson Ewoh, has cautioned politicians in Ahoada East Local Government Area against acts capable of derailing the progress already made in instilling democratic principles and ethos in the people at the grassroots.
Ewoh, who gave the warning at a restoration meeting between the leadership of the All Progressives Congress (APC) and the Caretaker Committee chairman, of Ahoada East Local Government Council, Mr Andy Nweye, particularly warned the leadership of the party against acts of indiscipline and impunity in the area.
The lawmaker said that the party was bound to work with the council’s caretaker committee for the peace and progress of the area, as failure to do so would amount to an act of indiscipline.
He also directed the caretaker committee to pay monthly stipends to the party executive in the area to enable them perform efficiently and effectively.
Responding, the Caretaker Committee Chairman, Chief Andy Nweye, said that the resolution of the crisis would enable the council to focus on the development of the area, adding that the situation would further strengthen the party to win all elections in the area.
He commended the APC leadership for agreeing to toe the line of peace and sustainable development, pointing out that this is the time for the party to put aside all forms of grievances and ranglings to enable them move Ahoada East foreward.
Also speaking, the Chairman, APC Ahoada East, Hon Umar Owuzie, described the party as one big family that has the capacity to resolve its challenges without external influences, adding that the party was now prepared to work with the council to ensure the sustainable development of the area.
In his remarks, Special Adviser to the Rivers State Governor on Inter-Party Relations, Barrister Ebeku Solomon, urged members of the party to go back back to their various wards and mobilise their people to vote for the APC in the 2015 elections. 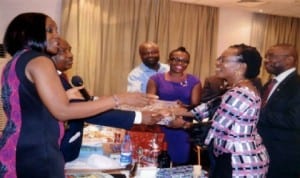