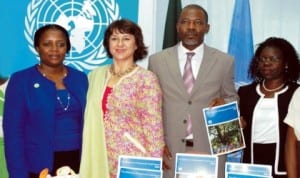 In line with the
Millennium Development Goals (MDGs) agenda of the Federal Government, one of the host communities of the Fderal Airport Authority of Nigeria (FAAN), has called for special recognition that would enhance development of the area.
Speaking with newsmen recently at his palace in Omagwa in Ikwerre Local Government Area, the ruler of the community, HRH Eze Jacob Orji said the community was long overdue for a special attention from the Federal Government.
He said the donation of land for the airport by his people was enough reason to attract federal presence in the area.
Orji, noted that the community by so doing, has contributed to the Gross Demostic Product (GDP) growth of the federation.
He also called on the Rivers State Government to act in that direction, following the donation of the airport hotel land and the games village.
The monarch, explained that Omagwa Community has been peaceful over the years with the Airport Authorities and wondered why investors were yet to be attracted to the area to enhance development of the community.
The royal father blamed the slow rate of development in the area to the non-recognition of its chieftaincy stool by the government, adding that businessmen were not ready to transact business with non-recognised chieftaincy stools.
He was of the view that since they have contributed immensely to the development of the state, that it would be equitable, if the community can boast of economic growth in the nearest future.
The Tide however, gathered that the community is also hosting the International Motor Park built by the State Government.

Fashola Harps On Importance Of Co-Operatives