Leaders of the South-
East zone rose from a meeting in Enugu, last Wednesday, insisting that the ongoing constitutional conference should produce what they described as a ‘people’s constitution’ for the country to be able to achieve the objective of the confab.
The group, under the aegis of Igbo Leaders of Thought, faulted developments at the on going national conference, which they feared might make it difficult for the nation to be availed of a ‘people’s constitution.
At the end of the well attended meeting , the leader of the group and constitutional lawyer, Prof. Ben Nwabueze, told journalists that “by a people’s constitution, we mean a constitution adopted at a national conference and ratified or approved at a referendum of all the people of this country.
Nwabueze restated the “two strategic interests of Ndigbo,” which the South East hopes to achieve through the national conference as “the zonal structure of the Nigerian federation, which is the creation of six or more zones in the country and with the 36 states being retained as part of the federal structure. This is strategic to the interest of Ndigbo because we cannot achieve the kind of autonomy we desire under the existing structure of 36 states, going from there to the Federal Government.”
According to him, ‘‘the existing 36 states are not effective to be able to administer the kind of powers and finances that will be devolved on them, taking from the centre to them. They will not be able to administer effectively, every experience points to this.”
Stressing the need to reduce the powers at the centre, Nwabueze said: “If you want to reduce the powers of the centre, which is the problem that we are having today, (an over-powerful centre), to whom do you give this?, to the existing 36 states?, they certainly will not be able to shoulder this additional powers and they will not also be in a position to administer the money that will be taken away from the centre and given to the federating units.”
According to the elder statesman, “all these point to a new structure that will be the Federal Government at the centre, the zones-six or more-and then the states. This is strategic to the interest of the Igbo because it conduces to the autonomy we want for Ndigbo in the new Nigeria.”
Also considered as strategic to the interest of the Igbo is the question of the right of self determination. Nwabueze lamented how “this suggestion and proposal by the Leaders of Thought has been turned down by the national conference at the behest of the North. So, they killed the idea of six zones structure and they also killed the idea of self determination!”
He spoke of further consultation geared towards the fulfillment and promise made “to the First Lady when I met her on May 12, 2014 that I and the Igbo Leaders of Thought will work with Mr. President. I made that promise and we have agreed on that. But the condition is that the President is also willing to work with us. The president must be willing to work with us. So we remain open to a meeting between Mr. President and a select group of our leaders. 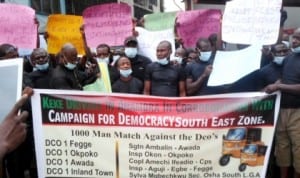