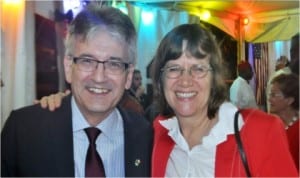 German Ambassador to Nigeria, Mrs Dorothee Janetzke-Wenzel and her French counterpart, Jacques Champagne De Labriolle, after the quarter-final match between both countries at the 2014 World Cup in Brazil.