The wife of the President,
Dame Patience Jonathan said the book, “Ground Work of Okrika History” provides an avenue for the people to understand, where they are coming from and the way forward.
She stated this during the public presentation of the book written by Venerable Biebele Atemie Obuoforibo in Port Harcourt recently.
Represented by the Chief Executive Officer of the National Centre for Women Development (NCWD), Lady Onyeka Onwenu, said the  book would be very useful to the entire people of Okrika, Nigeria as a nation and bring about national development.
She commended the author for the book and the important role he has played in the peace process of the Okrika people as a Christian Leader.
Speaking as chairman of the occasion, the chairman of Okrika Divisional Council of Chiefs, Chief Nemi Wisdom Adoki attributed the declining level of education and poor communication among the present generation to their failure to read books, and enjoined all to imbibe the culture of reading and writing books.
Also speaking, the Amanyanabo elect of Ogu, King Nicholas Ibiebele Nimenibo Loko, the 9th advised all to have a copy of the book for historical records, describing the author, as a fearless man who always spoke the truth.
Reviewing the book, a former member of Federal Character Commission, Chief Spiff  Taribo said it stands out as a monumental gift to the Wakirike people, adding that the author deserved support and encouragement.
In his presentation, Professor Atuboyedia Obianime blamed disunity among Okrikans on greed, and called on the chairman of the Okrika Divisional Council of Chiefs to help unite the chiefs and people.
In his remark, the author of the book, Venerable Obuoforibo, who dedicated the book to his late parents said he started writing when he was lecturing at the College of Education, now University of Education as a Church Historian, and thanked all for gracing the occasion. 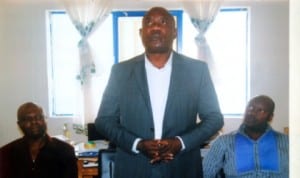