The Bauchi State Police Commissioner, Malam Lawal
Shehu said last Saturday that one suspect had been arrested in connection with Friday’s attack on an hotel in Bauchi metropolis.
Briefing newsmen on the arrest made, Lawal said that the suspect was being interrogated and efforts intensified to apprehend his accomplices that fled.
He urged members of the public to be security conscious and observe happenings within their immediate environment and advised the general public to pay special attention to persons and objects, particularly at motor parks, market places, schools, places of worships, shopping malls, eateries and hotels.
“They should report any suspicious persons or objects within their neighbourhood, to the nearest police station for prompt response, using these numbers – 08151849417 and 07013490795, he said.

The National President, Defence and Police Officers
Wives Association (DEPOWA), Mrs Mary Badeh,  has reaffirmed the commitment of the association to support barracks community.
Badeh made the pledge in Abuja on Saturday at a send-off party organised for Mrs Aminat Ibrahim, the former president of the association and four coordinators who served during her tenure.
“Let me use this medium to reaffirm the commitment of DEPOWA to continue to provide the necessary support and encouragement to the families of our members and the barrack community.
“I will not fail to acknowledge the support of the former Chief of Defence Staff and his successor to the aspirations of DEPOWA,’’ she said.
She added that the association also honoured Ibrahim for her kindness within and outside the barracks community, and
Some of the achievements of the former president to include the successful hosting of DEPOWA Week and the rehabilitation and restructuring of its secretariat building.
She also commended Ibrahim for the purchase.

The Kaduna State government spends N110 million
monthly on refuse disposal, the Commissioner for Environment, Alhaji Kasimu Abubakar, has said.
Abubakar who made the disclosure last Saturday while addressing newsmen in Hayin Banki community in Kaduna when he visited the area to inspect the monthly sanitation exercise said the government engaged the services of 91 refuse disposal companies to dispose refuse across the state.
He said the companies employed 2,700 sanitation workers to dispose refuse adding that the government was consulting with private organisations and individuals to set up recycling plants in the state that would use the refuse to produce fertiliser.
The commissioner urged the people of the community to observe the monthly sanitation exercise by staying at home and cleaning their environment.

The Kano State Task Force on Environmental Sanitation
realised N352,200 from fines imposed by mobile courts on 144 defaulters of the June edition of the monthly clean-up exercise in the state.
The Commissioner for Environment and Chairman of the task force, Alhaji Abdullahi Abbas, announced this on Saturday in Kano while monitoring the conduct of the exercise in the metropolis that the defaulters were apprehended and tried for non-compliance and violation of the order on restriction on movement of people during the exercise.
Abbas told newsmen that the courts operated at 10 designated centres in the metropolis, adding that government would soon inaugurate the task force in each local government area to ensure proper compliance.

The Deputy Governor of Kogi State, Mr Yomi Awoniyi,
has urged Mostems to pray for an end to the security challenge in the country during Ramadan period.
In a statement signed by his Press Secretary, Mr Michael Abu in Lokoja last Saturday. Awoniyi enjoined Muslims to use the holy month to maximise the spiritual and physical benefits inherent in it.
He identified good intention, prayers and firmness of purpose in the pursuit of good deeds as conditions for reaping the benefits of the holy month.
Awoniyi said Ramadan was one of the five pillars of Islam and urged Muslims to be proactive in their decisions and actions that would ensure their participation in the fasting.
He called on preachers to guard their utterances during the fasting period, urging them to preach the true teachings of Islam rather than engage in mutual accusation.

The All Progressives Congress (APC) in Osun State has
urged Mostems to use the Ramadan as a period of reflection and pray for peace to reign in Nigeria.
A statement signed by Mr Kunle Oyatomi, the party’s Director of Publicity, Strategy and Research last Saturday in Osogbo.
Chairman, Senate Committee on Environment and Ecology, Dr Bukola Saraki, also urged Muslims to use the opportunity of Ramadan to pray for the restoration of peace in the country.
“I give thanks to Almighty Allah for keeping us alive and healthy to witness and partake in another Month of Ramadan; the month of forgiveness, mercy and abundant blessings. “I urge the Muslim to use the opportunity of this month’s divinity to get closer to Almighty Allah and wish them a successful Month of Holiness’’, he said.

The Speaker, Osun State House of Assembly, Mr Najeem
Salaam has urged Muslim faithful to use the Ramadan period to offer special prayers for the country’s peace and unity.
Salaam made the appeal in a statement issued by his Chief Press Secretary, Mr Goke Butika, Sunday in Osogbo.
According to the statement, the holy month of Ramadan is a period dedicated to seek the face of Allah and urged Muslims to use the occasion to pray for peace and tranquility in the country.
Salaam said with fervent prayers, he believed that the current security challenges threatening the country would be surmounted.
The speaker, however, appealed to clerics to lay emphasis on peace and harmony among Nigerians in their teachings.
Oyo

Former Governor of Oyo State,  Adebayo Alao-Akala has
urged Mostems in the country to use the Ramadan fasting period to pray for the nation’s development.
Alao-Akala, who made the call in Ogbomoso last Saturday, urged Muslims to be steadfast in prayers.
He said Ramadan was a symbolic month meant to move closer to God and called on the Muslims to pray very hard for the nation and that the progress recorded so far was a pointer that the nation would soon attain the enviable position it desired. .
The former governor, who wished Muslims smooth and successful fasting for the next 30 days, urged them to emulate the life and ways of the holy Prophet Muhammed.

The Peoples Democratic Party ( PDP) in Sokoto State
said last Sunday that it would wrest power from the ruling All Progressives Congress ( APC) in the state in 2015.
The newly-elected Chairman of the party, Alhaji Ibrahim Milgoma, told newsmen in Sokoto that the party is intact and united. There will be no retreat or surrender until we take over the government in 2015.”
According to him, the leadership of the party in the state will ensure that the choice of candidates for the various elections is respected.
“The choice of the people will prevail. There will be no imposition of candidates and we will do everything humanly possible to ensure free, fair and acceptable polls,” Milgoma said.
Milgoma said that PDP was blessed with members who were experienced enough in electioneering campaigns.
“This experience will come to bear during the upcoming elections and the party will emerge victorious at all levels.”

The police in Jalingo confirmed that unknown gunmen
last Saturday trailed and killed 13 Fulani herdsmen who were returning from village markets in Garba-Chede and Maihula.
The Police Public Relations Officer (PPRO) of the police command in Taraba State ASP Joseph Kwaji, made the disclosure on Sunday in Jalingo.
He said the herdsmen were waylaid and killed by unidentified group of armed youths along a bush path in the outskirts of Maihula in Bali Local Government Area of the state.
He added that it was not clear why the incident took place but further investigation would be able to reveal the reasons for the attack and the people behind it.
The Chairman of Bali Local Government Area, Mr Andrew Yerima, said the herdsmen were trailed by the armed men from Garba-Chede market where they were believed to have gone to sell their cows. 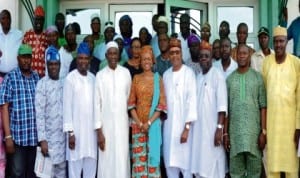 Wife of the former Governor of Lagos State, Sen. Oluremi Tinubu (middle) with other apc chieftains after a meeting with her in Lagos, yesterday. Photo: NAN