The Federal Ministry of Agriculture and Rural Develop
ment on Tuesday, said over 135,000 dry season rice farmers were assisted by Federal Government in Adamawa.
The state Director in the ministry, Dr Walia Hamman, who made the disclosure in an interview with newsmen in Yola said the development, which was a special programme under the Agricultural Transformation Agenda, was aimed at improving local rice production.
He said under the programme, government provided over 1,500 metric tonnes of improved rice varieties which was distributed free to the farmers.

The Independent Corrupt Practices Commission (ICPC)
on Tuesday  arraigned  a Deputy Superintendent with the Nigeria Security And Civil Defence Corps (NSCDC), Margret Onoja , before an FCT High Court for alleged fraud.
The anti-graft agency alleged that Onoja lied to officers of the ICPC on the number of bank accounts she was operating.
The prosecutor, Mr Paul Bassi, told the court that the accused actions violated Section 25 (1) (a) of the Corrupt Practices and other Related Offences Act, 2000.
The accused was alleged to have concealed the ownership and operation of a Zenith Bank Account with number 6216501714 in her company’s name, Shekina Glory Cooperation Society Ltd.
According to the prosecutor, the accused was a sole signatory to the Zenith Bank account with a N75 million balance and that the accused also concealed the existence of a First Bank account with the balance of N40 million.

Jigawa
The Executive Secretary, Jigawa Rehabilitation Board,
Alhaji Abubakar Raba-Kaya, said on Tuesday, that the Albino Foundation (TAF) would build a skin hospital in the state.
He said that the state government had donated a piece of land for the construction of the proposed hospital which would be sited in Dutse.
The scribe said the hospital would be accessible to albinos and other members of the public and he described the establishment of the hospital as a “great achievement’’.
Raba-Kaya urged albinos and other citizens of the state to patronise the facility to cater for their skin.

Kaduna
The Muslim Students Society of Nigeria (MSSN) on
Tuesday condemned Monday’s college bombing in Kano that killed eight students of the School of Hygiene.
Its President, Malam Yusuf Arrigasiyyu, said in Kano that the attack on the school was “satanic and devilish’’.
He urged the Federal and Kano state governments to set up investigative panel to fish out and prosecute all those behind the blast and also to beef up security across the state and other parts of the country, especially in the North-East to curtail the activities of the insurgents.
Arrigasiyyu said that members of the Boko Haram sect were not Muslims and did not represent Muslims and appealed to parents not to allow the bombings to distract them from sending their children and wards to school.
.
Katsina
Manager of  Rural Development Animation Programme
(RUDAP), an NGO, Rev. Sister Regina Onyegbule, has called for more spending on sanitation and literacy campaigns in rural areas.
Onyegbule, who made the call while speaking with newsmen in Funtua, Katsina State, on Tuesday urged governments at all levels, individuals and community groups to redouble efforts on economic empowerment schemes, sanitation and literacy programmes in rural communities.
The manager said this effort was capable of uplifting the living conditions of the citizenry and appealed to the communities to cultivate the habit of clean environment and ensure good hygiene at all times.

The new Coordinator of  the NYSC   in Kwara, Mr
Adebayo Amusa,  has called on employers in the state to improve the welfare of corps members.
Amusa made the call on Tuesday in Ilorin when he visited the News Agency of  Nigeria (NAN) office as part of his familiarisation tour of media houses.
The coordinator said the welfare of corps members would be his priority while serving  in the state and enjoined employers to prioritise  corps members’ welfare,  especially issues concerning  their accommodation and allowances, healthcare and security.
Amusa also  appealed to host communities and local government councils to build Corpers’ Lodges for corps members.
“ The NYSC is not a baby of the Federal Government alone, it belongs to states, local government, organisations and host communities,’’ he  said.

A Minna Magistrates’ Court on Tuesday, sentenced a
labourer, Ndagi Mohammed, 31, to three years imprisonment for impregnating a 12-year-old pupil.
Mohammed, who was charged with unlawful sexual intercourse with a teenager, was convicted after he had confessed to the offence as charged.
In her ruling, Magistrate Amina Musa, sentenced Mohammed to three years in prison without an option of fine.
The prosecutor, Insp. Alfred Auta, had told the court that one Ahmed Zakariya of Okada Road, Minna, reported the case to the police on June 22.
He said that the complainant on June 20, discovered that his younger sister was pregnant adding that the convict impregnated the girl, who is a primary school pupil, after having sex with her three times in his house.

A physician at Ladoke Akintola Teaching Hospital
(LAUTECH), Dr Segun Babatunde, on Tuesday, advocated inter-disciplinary patient management in health-related institutions.
Babatunde, a member of the palliative care unit at the hospital, said this in Osogbo in an interview with newsmen ading that with the development of palliative care in modern medical practice, there was the need for medical trainees to be grounded in inter-disciplinary patient management.
“At many professional workshops, we have come across nurses and physiotherapists alleging doctors of being indisposed to release patients for specialised treatment.
“There are a lot of contemporary developments in the medical world that are in the interest of improved health care delivery, he said.
“However, if entrants into these new departments in the medical world are not well indoctrinated, there may be cases of protecting territories while treating patients and “There are times when a general practitioner is taking care of patients, even those with terminal illnesses.
“A trained palliative giver may however think he is more appropriate to see that such patients are given specialised handling.

The Plateau State Government says it will spend N5.5 bil
lion for contracts variation, including new ones this year.
Commissioner for Information and Communication, Mrs Olivia Dazyam, said this at news briefing on the outcome of the state executive council’s meeting in Jos.
She said that the approval for the variation and execution of new projects was given at the council meeting  chaired by Governor Jonah Jang.
The commissioner said that the variation on one of the roads would gulp N1.8 billion due to increase in the scope of work on the construction of Bisichi-Koro-Fan-Mangu Halle road with six new spurs.
Dazyam said that additional works were also considered on the ongoing construction of the new Government House.

The Chairman, Bodinga Local Government Area, Sokoto
state, Alhaji Shehu Badau, said the council had completed the construction of five mosques in the area.
Badau in Bondinga on Tuesday, said that the mosques were built at the cost of N42 million, adding that they were located in Bangi Rafi, Kauran Hanya, Bunazawa, Darhela and Bodinga communities.
He called on the people in the communities to reciprocate the council’s gesture by praying for God’s intervention in the socio-economic and political activities of the area.
The chairman restated his administration’s commitment to providing basic infrastructure that would improve the living condition of the people. 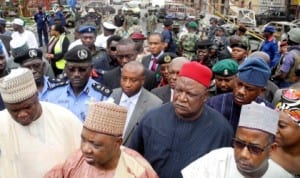