The Nigerian Society of Engineers (NSE) last Saturday
said decisive measures were being taken to stop the cases of building collapse in the country.
The National President of the society, Mr Ademola Olurunfemi, made the pledge at the ground breaking and foundation laying of NSE branch office in Yola.
The president, who was in Yola for a two day visit, was represented by the National Vice President of the society, Mr Kunle Mokolo
Olurunfemi said the society was disturbed by the cases of building collapse in the country, adding “the society is taking decisive measures.”
He said among the measures being taken was effort to bring out the intellectual capacity of Nigerian engineers to eradicate the syndrome.

Darazo Local Government in Bauchi State and the state
Basic Universal Education Board (SUBEB) have donated 21 bicycles to disabled primary school pupils to ease their transportation to schools.
The Chairman of the council, Alhaji Kabiru Sade presented the items to the beneficiaries on Sunday in Darazo, headquarters of the area.
Sade, represented by the Head of Administration of the council, Alhaji Yusuf  Ningi, said it would reduce the transportation problems being faced by the pupils and he commended SUBEB for its initiative and commitments by alleviating the plight of the beneficiaries.
The Secretary, Local Government Education Authority, Alhaji Adamu Disina,  explained that SUBEB procured 11 of the bicycles while the council had the rest and called on the beneficiaries to ensure that the items were properly maintained.

The National Directorate of Employment (NDE) in Borno
State  last Saturday said it would train 25 graduates on industrial attachment to enable them to acquire skills to be self-employed.
State Coordinator, NDE, Alhaji Wakil Kalanga, said in Maiduguri that the graduates would be trained under the Industrial Attachment Programme of the Agency.
Kalanga said that the selected beneficiaries were state indigenes who graduated last year and had not yet secured job adding that said the programme was designed to train them to showcase their potentials, so that they could be gainfully employed and also be employer of labours.
The coordinator said the gesture was in line with the President Goodluck Jonathan’s Transformation Agenda to create job opportunities and reduce unemployment.
Kalanga said last year, NDE trained 50 graduates, saying that most of them were now gainfully employed or self-employed.

The Chairman of Gwaram Local Government in Jigawa
State, Alhaji Hanafi Yakubu, has advised new councillors in the area to protect the interest of the people that voted them into office.
Yakubu who gave the advice during the swearing-in of the councillors on Saturday in Gwaram, urged them to make laws that would bring about development and positive impact on the lives of the people.
The chairman emphasised the need for the councillors to take the oath they took seriously and not to do anything contrary to their oath of office.
Yakubu enjoined the people to be loyal to their leaders and support them to facilitate rapid development of the area.

The Director, Public Affairs, Kaduna State Muslim Pil
grims Welfare Board, Alhaji Adamu Muhammad, said government had established a committee for practical demonstration of Hajj operations to enhance success of 2014 Hajj.
Speaking shortly after the flag-off of the practical demonstration of the exercise in Zaria last Saturday. Muhammad lauded Governor  Muktar Yero of Kaduna State for establishing the committee, assuring that it wiIl go a long way in keeping the state intending pilgrims well informed for successful Hajj.
The director said the committee would visit all the 23 local government areas of the state to practically educate them for enhanced and better result.
In an interview, Alhaji Adda’u Muhammad, Pilgrims Officer, Zaria Local Government, appealed to intending pilgrims to cooperate with the tutors for the good of all.
Muhammad said the practical demonstration would not interfere with the normal weekly Hajj training.

An educationist, Mrs Rose Omonubi, last Saturday
called on Nigerian universities to adopt new courses that would make their graduates employable and entrepreneurs.
Omonubi, Executive Director, Nubi Educational Counselling Ltd.,who  spoke on the sideline of the 2014 Nubi Education Fair in Lagos, advised universities to restructure their courses to meet the needs of the nation’s industry.
She said that courses like accounting, marketing, banking, engineering and pharmacy were no longer competitive in the labour market.
“If you go to the University of London Library, the best theses there were written by Nigerians”, she said.

President Goodluck Jonathan last Saturday said the Fed
eral Government would comprehensively tackle challenges facing all sectors of the country’s education.
Jonathan said this at the combined 21st, 22nd and 23rd convocation of Federal University of Technology (FUT), Minna.
He stressed the need for reorientation of our value system with increased emphasis on conduct, character and competence.
The president  who was represented by Dr John Mack, the Permanent Secretary, Federal Ministry of Education enjoined educated elite in the society not to see people who did not have university degree as second class citizens.

The Federal University of Agriculture Abeokuta
(FUNAAB), last Saturday graduated 81first class students at its 2011/2012 and 2012/2013 convocation.
The institution’s Vice-Chancellor, Prof. Olusola Oyewole, said in Abeokuta  that of the 3,859 graduating students, 3,555 were for first degrees, while 304 were post-graduate students.
Oyewole said the Colleges of Animal Sciences, Livestock Production and Natural Sciences had 20 first class graduates each.
He said the institution was committed to the provision of visionary leadership, sustainable management of resources and committed to providing world-class future leaders.

The Sultan of Sokoto State, Alhaji Sa’ad Abubakar, has
appealed to Oyo State government to immortalise the late Alhaji AbdulAzeez Arisekola-Alao.
Abubakar, who was in Ibadan Saturday to commiserate with the family and the state government, said though Arisekola-Alao was dead his legacies should not be forgotten.
The Sultan, who is the President-General of Nigerian Supreme Council for Islamic Affairs (NSCIA), said Nigeria had lost a prominent son but not lost his spirit. He said the deceased would be difficult to replace in Nigeria because he dedicated his life in the service of his creator and mankind.
Plateau

Governor  Jonah Jang of Plateau State has urged Nige
rians to observe regular exercise to enable them to stay fit, healthy and live longer.
Jang, who gave the advice last Saturday at the 25th edition of Olympic Day Run in Jos, said exercise was crucial for the body.
Represented by Mr Agwom Sani-Zandi, Commissioner for Solid Minerals Development, Jang advised people to know their health conditions before embarking on strenuous exercise, stating that his administration embarked on massive projects in the sports sector in recognition of its importance.
Zamfara

Top government officials in the Gov. Abdulaziz Yari-led
All Progressives Congress (APC) administration in Zamfara are gradually resigning their appointments and leaving the party.
The Commissioner for Agriculture, Alhaji Malami Yandoto and three directors-general had resigned their appointments in the last one month.
The DGs included that of Governor’s Office, Alhaji Mustapha Bukkuyum;  Alhaji Shehu Yanware of the Directorate of Inter-Party Relations and Alhaji Haruna Jangebe of the Directorate of Non-Governmental Organisations. 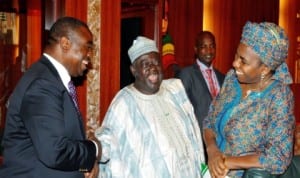