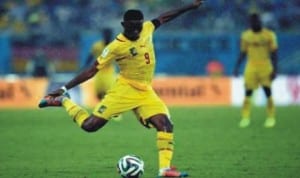 Eto’o in action against Mexico in Brazil last Friday

Ogenyi Onazi is insisting  that Nigeria can qualify for the second round of the World Cup despite an unexpected draw against Iran.
The Super Eagles failed to find a way past the resolute defending of the Iranians to finish with the first 0-0 draw of the tournament, but Onazi is confident all hope is not lost.
“We are not happy we didn’t win, but that’s football,” Onazi told newsmen after the match.
“We wanted to win but that didn’t happen.
“It doesn’t make it any more difficult. If we win the next two games, we will qualify from the group.
“That is what we have to do,” he added.
Nigeria’s next game is against Bosnia Herzegovina in Cuiaba, with the winner of that game expected to join Argentina in the next round.
Meanwhile, the President-General, Nigeria Football Supporters Club (NFSC), Rafiu Oladipo, yesterday urged Nigerians to remain steadfast in prayers for the Super Eagles to overcome the disappointment of Monday’s goalless draw against Iran.
Oladipo told newsmen in Sao Paulo, Brazil that Nigerians should not despair over the chances of the Eagles in the World Cup.
“Pray without ceasing, and God in His infinite mercies, will see us through,’’ he said.
Oladipo noted that the Eagles on several occasions, started competitions on a slow note only to pick up in subsequent matches.
The President-General said he was optimistic that the Eagles would improve on their performance in subsequent matches.
He said that with the belief in God, the prayers of Nigerians would not go unanswered and the team would not crash out in the group stage.
Oladipo, who is also the President-General, African Football and Other Sports Supporters Union (AFOSSU), also urged the Eagles to brace up in their matches against Bosnia and Argentina.
“Eagles should brace up against their opponents in their next matches, they should not be complacent.
“The statistics of the match against Iran showed that Nigeria had an upper hand in the match, but our boys could not convert opportunities before them.
“They should go all out against Bosnia and Argentina; the two matches are winnable.
“They should be courageous and should not nurse any form of fear or intimidation against their next opponents.
“They should not allow the outcome of the first match dampen their morale and determination to advance,’’ he said.
Nigeria will meet Bosnia and Herzegovina on Saturday and Argentina on June 26 in their remaining Group F matches.

Mexico Hold Brazil In Another Stalemate