Bayelsa State Govern
ment has donated land to both Nigerian Airforce and the Navy for construction of an airstrip and the permanent site for a Naval Research Institute in the state.
The State Governor, Hon. Seriake Dickson, announced this in Government House while playing host to the Air Officer Commanding, Mobility Command, Air Vice Marshall, Samuel Abosede and the Flag Officer Commanding, Central Naval Command, Rear Admiral Peter Agba, who paid him a courtesy call in his office.
Dickson described the approval of an airstrip in the state by the Nigeria Air Force as a project that would fast track development in the state and accordingly announced the donation of land to the Mobility Command as well as the Nigerian Navy to enhance their operations. According to him, the land approved for the Central Naval Command would also be used for the construction of its permanent site, research institute and other social amenities such as hospitals and schools.
On the request made by the Flag officer Commanding, the governor said, “we had some discussions with your former Chief of Naval Staff, where we talked about the need for Naval schools here.I know that Naval schools are usually very good and so we have already made land available. However, there are some issues emanating from your headquarters as to what our contributions in developing that school should be. So, we are in the process of working out appropriate contributions we can make.
Expressing appreciation to the Federal Government and the Nigeria Air Force for the project, the state chief  executive intimated the military officers of the progress of work done so far on the N25 billion cargo airport project, which is a collaboration between the state and federal governments.
He said, land preparation for the project was underway, noting  that, clearing of the site, sand-filling and construction of the runway would require N2 billion, which he remarked was being handled by the state government.
In their remarks, the Air officer Commanding, the Mobility Command, Air Vice Marshall Abosede and the Flag Officer Commanding, the Central Naval Command, Rear Admiral Agba, thanked the governor for his support and assured him of their readiness to partner with other security agencies to combat crime in their area of jurisdiction. The GOCs solicited the state government’s support in the provision of logistics and the construction of a jetty at the Forward Operating Base, Cape Formosa in Brass local government area of the state. 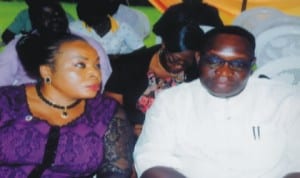