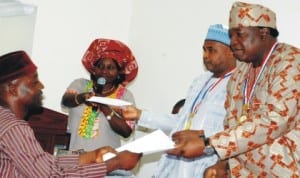 The Federation of Tourism Association of Nigeria (FTAN) said last Tuesday that multiple taxation and high bills were among the factors hindering development of tourism.
Chief Tomi Akingbogun, the association’s President, disclosed this at the second edition of the Nigeria Tourism Investors Forum and Exhibition for 2014.
Akingbogun said taxes and bills demanded by different agencies under different names and tags were not helping the growth of the sector.
According to him, most organisations and companies can barely survive after paying the various bills.
“Same bills are demanded in different titles, like the staff monthly pension, medical insurance, five per cent VAT, guest parking, water and vehicle dustbin bill by local government.
“COSON asking hotels, night clubs and restaurants to pay N1 to N2 billion for music played on Paid-TV (DSTV), ITF and NSITF, one per cent for staff monthly emoluments,” he said.
He said NIPOST was planning to introduce stamp duties of N50 for every N1000 sales.
“These are just some of the economically unrealistic bills that businesses have to contend with,” he added.
He said the use of mobile courts to seal business premises, lack of patronage from government and prominent people were also making it difficult for tourism to flourish.
“The public are not left behind in the neglect of Nigeria tourism investments, wedding s for Nigerian couples are now taken abroad to show affluence,” Akingbogun said.
The FTAN president called on the National Orientation Agency to do more to sensitise Nigerians to the tourism potential of the country.
He called on Nigerians to patronise home-made goods and the country’s tourism destinations.
The FCT Minister of State, Oloye Olajumoke Akinjide, in her paper entitled “FCT as an Emerging Conference Destination’, said “tourism creates entrepreneurial opportunities and brings development”.
Akinjide, who was represented by Mrs Adebola Elegbede, Director, Tourism and Social Development, said tourism had a significant multiplier effect on other sectors of the economy.
“Beyond its value as a foreign exchange earner, tourism brings significant impetus to the development agenda, and it is a great marketing vehicle for a nation’s culture, its products and people.
“Culturally, tourism enables people from different backgrounds to enjoy and celebrate their diversity.
“In addition, tourism facilities can be important catalysts for and components of regeneration that improve areas both for residents and tourists,” she said.
Akinjide said it was the strategic place that tourism enjoyed with the FCT that led to the inauguration of the National Institute for Hospitality and Tourism to produce the FCT Tourism Policy and Master Plan.
Akinjide said the aim of this was to produce a professionally thought out framework to increase the contribution of tourism to the economy of FCT.
The minister assured FTAN that all the issues raised concerning multiple taxation would be looked into by the FCT administration.
She commended the tenacity of the Hotels Owners Forum and FTAN in bringing to the fore those issues that inhibit the promotion of tourism in the nation’s capital.
She said that the administration partners with them and other stakeholders to provide conducive and enabling environment to promote tourism in the FCT.

PENCOM To Invest In Corporate Bonds