Coach Lateef Erinfolami of
Lagos Islanders Basketball Club last Saturday applauded his team’s performance over city rivals, Union Bank, describing the win as vital in building the team’s confidence.
Islanders, fourth on the Atlantic Conference log beat table toppers, Union Bank 67-61 in their Week 13 encounter of the ongoing DStv Basketball Premier League in Lagos.
The victory puts Islanders in a comfortable position in their quest to qualify from the Atlantic Conference for the National Final Eight Playoffs coming soon.
Erinfolami told newsmen that his players performed exceptionally well and that such was needed as they build the momentum for the national playoffs.
“I’m happy about how we played; we got into the lead from the first quarter and never looked back. With the way we played, we were obviously more desirous of victory.
“It was also a day that our forwards led by Seyi Ayodele, Hillary Aigbokaode, Chinwedu Nwaigbo and Ibrahim Orkpe really put the heat on our opponents.
“It was a great match for us and vital to building the team’s confidence and the momentum we need to perform well at the national final eight,’’ he said.
Meanwhile, Rotimi Savage, Union Bank’s Assistant Coach, told newsmen that his team woke up late in the match having allowed Islanders to jump into a 21 points lead in the third quarter.
“We lost concentration in the third quarter and allowed Islanders take a 21 points lead.
“We tried to reduce that lead in the fourth quarter but it was too late, because the damage had already been done.
“It is a sad loss but it is one of those games,’’ Savage said.
In another match played at the Indoor Sports Hall of the National Stadium, Lagos, Dodan Warriors of Lagos, whitewashed Police Baton of Lagos, 83-64.
Police Baton had led 17-15 in the first quarter of the match but slipped in the second as Warriors took over by recording 32-22 point’s advantage.
The Warriors never looked back in the third and fourth quarters as the combination of Azoma Dike and Romaric Quenum proved to be too hot for Baton.
Both players led their team’s scoring chat with 23 and 15 points respectively, while Ifeanyi Modo and Mike Salvadogo also of the Warriors team stood firm in the defence.
Warriors Head Coach, Chris Nomige, told newsmen that his team simply saw that chance early in the game to put it beyond Baton and they did just that.
“It was a great game we won confidently because we took our chances at the right time.
“With our two feet in the national final eight we can relax and plan ahead for the coming competition which we desire to win,’’ Nomigo said. 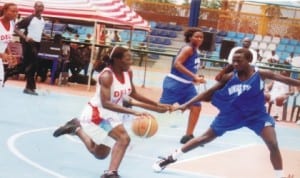