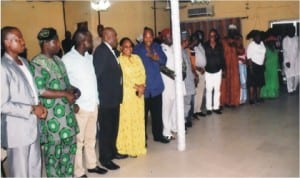 A cross section of non-indigenes in All Progressive Congress (APC), during their inauguration in Port Harcourt, last Wednesday. Photo: Prince Dele Obinna

Abuse Of State Power …That Law On Gov’s Retirement Benefits