President Goodluck
Jonathan on Tuesday described the late Prof. Celestine Onwuliri as a symbol of hard work and excellence, and charged young academics to emulate his virtues.
Jonathan, represented by the Minister of Land, Housing and Urban Development, Mrs Akon Eyakeny, said at a colloquium and foundation laying ceremony of Centre for Disease Control in Nsukka, Enugu State, lastTuesday.
The centre was in honour of the late Onwuliri, who died in the Dana plan crash on June 3, 2012 at Iju, near Lagos.
He said the immortalisation of the late Onwuliri, who served his fatherland with dedications, should encourage younger generation to pursue excellence with honesty and hard work.
“I encourage our younger generation to emulate the sterling qualities of this erudite scholar, public administrator and community leader in contributing to the national development. This colloquium and centre for disease control is in honour of a great man who distinguished himself before his sudden demise. “History will continue to remember anyone, who made significant impact to the advancement of knowledge and national development,’’ the president said.
Jonathan said his administration would support the university in realising the centre that would help immensely to solve some of the health problems in the county.
He urged Nigerians to join hands with his administration to rescue the country from insurgents who had continued to unleash terror on innocent Nigerians.
“I know with your firm support we will overcome the security challenges in the country.
“Nigeria will forever remain one indivisible nation as no amount of threat by insurgents to tear the country apart will succeed,’’ he said.
The House of Representatives Deputy Speaker, Emeka Ihedioha, congratulated the new Vice-Chancellor of the university, Prof. Benjamin Ozurumba, for his selection and urged him to be fair to all.
“I congratulate you as the new vice chancellor of this highly respected university, and urge you to carry all along in your administration,’’ Ihedioha said.
Ihedioha described the late Onwuliri as a man of many parts who achieved success through hard work, honesty and fear of God.
He said, “I am happy the late Onwuliri left wife and children who are following the hard work, footstep of their father and husband. “I commend UNN, and especially the faculty of biological science, for celebrating this rare academic icon.’’
Ozurumba said the late Onwuliri was a celebrated academics, researcher and writer, who died while serving his fatherland.
“The achievement of the late Onwuliri is too many to mention as he served the country excellently in various capacities. The university will continue to remember his numerous contributions to country and the university in particular,’’ Ozurumba said.
The wife of the deceased, Prof. Viola Onwuliri,  who is the Minister of State for Foreign Affairs, said her husband achieved success in academics and administration because of his belief in excellence.
She said, “My late husband so much believed that excellence could only be achieved through hard work, honesty and fear of God. “He endeared himself to many people through his honesty, fear of God and his patriotism in serving his fatherland.
“I am indebted to Mr President who has been supportive since the unfortunate Dana plane crash in 2012. “I am also grateful to the university for finding it worthy to immortalise my husband. “My promise is that the family will continue to tow the line of hard work and honesty which my late husband was known for,’’ Viola said. 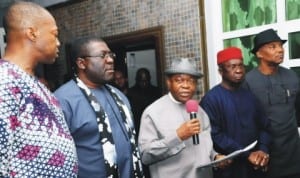