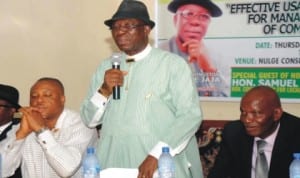 About N8billion is being expended annually on scholarships by the Rivers State Government, Governor Chibuike Amaechi has revealed.
Speaking through the Secretary to the State Government, Mr Goerge Feyii  while inaugurating the new 23 member Rivers State Scholarship Board yestersday, Amaechi said though the expenditure was putting the government under financial pressure, he believed the state will reap the benefit in the future.
He said, “ this administration is investing a lot in scholarship. Apart from the scholarship schemes that we run in local institutions, if you look at what is being done too with respect to those sent abroad through the Rivers State Sustainable Development Agency(RSSDA), the state is spending the tune of N8billion annually. We know that this is heavy. We also acknowledge the fact that no expenditure is heavy where you are talking about human capital development.”
Amaechi admitted that human capital was crucial in the development and management of the state’s resources.
He, therefore, charged members to be committed in their new duty, saying, ” this board is a serious board. It’s one of the most largest because it has representatives from every local government area.”
The governor expressed hope that the members were equal to the task as they were appointed based on merit.
The essence of spreading membership of the board across the local government areas, according to the governor, was to ensure that every part of the state is given equal opportunities, adding that, “ you are expected to ensure that every part of the state is given opportunity to benefit from the scholarship scheme so that there will be development”.
In his response, Chairman of the board, Hon Benjamin Orugbani thanked the governor for the appointment, and assured him of the commitment of members to serve.
He also promised that the new board will strive to drive the educational policies of the state.
Members of the board are Benjamin Orugbani, Musan Raphael, Elechi Ewo, Ade Sunny Josiah, Chief Raphael Amabipi, Deacon Emmanuel Egwut, Barrister Ibiene Amachree, Sotonye Ibiama, and Anga Harry.
Others are Chief Chu Abbey, Enyie Friday Enyie, Osundu Ibisike, Chikere Nwogu, Gordon Tonwe, Nyeche Worlu, Chief Eli Amamina, Abinye Kiri, Emmanuel Okata, Mrs Grace Sam Jaja, Kingsley Douglas, Cromwell Chuku and Kate Sam Ngbor.
Meanwhile, Chairman of the newly inaugurated RSSB, Benjamin Orugbani has assured that the board will begin the process of paying students’ bursary once it settles down.
He gave the assurance shortly after the inauguration yesterday and said every qualified student will be paid his stipend.