Residents of Owo Street in
Mile III, Diobu, Port Harcourt have commended the former councillor of Ward 18 in Port Harcourt City Local Government Area, Hon Henry Ichemati for the provision of a borehole for the area.
Cutting the tape at the commissioning of the project, Mr Benneth Azuonwu said “the people of Owo Street were indeed grateful for what Hon Ichemati had done for them.”
Azuonwu who noted that the project would go a long way in ameliorating the water challenges of the people stressed that the borehole was of good quality.
He, however, urged the former councillor to install solar lights to help in the security challenges they are facing.
Also speaking, a woman leader, Anna Sule, and a prominent opinion leader in the area, Mr Amaechi Iwuoha praised the former councillor for his gesture, stressing that no councilor in the ward had shown such love and care to residents of the street.
She assured that Owo Street would put the borehole to good use and also provide adequate security for the sustainability of the project.
Dignitaries that attended the event included a member of the House of epresentative, Hon Mrs Blessing Nsiegbe and a former chairman of Port Harcourt City Local Government Council, Chief Azubuike Nmerukini.
While Hon Nsiegbe was represented by the councillor representing Ward 5, Chief Nmerukini was represented by Hon Soni Ejekwu, former Chief of Staff, Port Harcourt City Local Government. 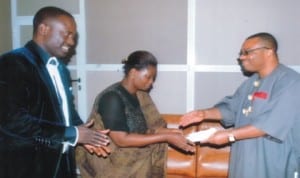 General Manager, Rivers State Newspaper Corporation (RSNC), Mr Celestine Ogolo(right), presenting a souvenir on behalf of Wisdom to Wealth and Development Foundation to the beneficiary of the initiative, Mrs Gloria West, during a courtesy visit to the corporation. With them is Niger Delta Coordinator, Wisdom to Wealth and Development Foundation, Prince Anyanate Kio, yesterday. Photo: Egberi A. Samspson