Ex-international Waidi Akanni, yesterday urged the Super Eagles not to take the Iranian national team for granted at the World Cup following the resignation of their Assistant Coach, Majid Salih.
Akanni gave the warning in an interview with newsmen in Lagos.
Salih was forced to resign because of infighting over who should be the direct assistant to the Chief Coach of the Iranian national team, Carlos Queiroz, a former coach of the Portuguese national football team.
Queiroz prefers Tony Simoez, another Portuguese, to be his assistant, while the football authorities in Iran prefer an Iranian for the post.
He said: “When an assistant coach or whoever resigns less than 10 days to a tournament, it means things are not well with the team.
“Of course psychologically, before the game starts, it will have effect on them and that also will depend on how they play the game on that particular day.
“So I won’t say that we should depend on that but we should just follow through with our plan, and I’m hopeful that we will get the result we are looking for against Iran.“
The Super Eagles will open their account in the 2014 World Cup, against the Princes of Persia on June 16 in Curitiba.
The Eagles are in Group F alongside Argentina, Bosnia Herzegovina, and Iran. 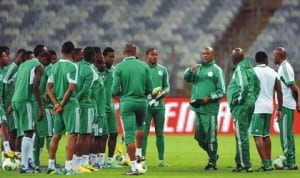