Rivers State Governor, Rt.
Hon Chibuike Amaechi says the state and   Germany need to work closely to eradicate poverty.
He made the assertion when he played host to the new German Consular- General, Mr. Michael Derus yesterday in Government House, Port Harcourt.
According to him, areas of collaboration include power projects, vocational  training and SME development.
Already, he disclosed that the state in order to revive vocational training had sent about 37 persons to be trained ahead the Special Vocational School to be opened before the end of the year.
He told the Consular -General that the state had also engaged the services of a German firm, Schneider in its power infrastructure provision while informing him that, “you have more Germans to look after in Port Harcourt.”
Amaechi while conqratulating Mr Derus for his appointment and visit to the  state, added that, “I believe that Nigerian Government needs to work  closely with German Government in the redistribution of wealth.”
Earlier, Mr Derus informed Governor Amaechi that he was in the state as part of familiarisation visits to his areas of coverage, which comprise 17 states of the federation.
He said the aim is to cement cultural and diplomatic relations between both countries.
Derus commended the governor for engaging German firms, especially in the power sector, noting that it would further promote Nigerian/German pact on energy development.
The German Consular-General also congratulated Amaechi on his 49th birthday, and wished him and the entire people of Rivers State well. 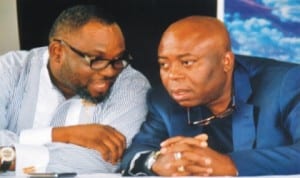